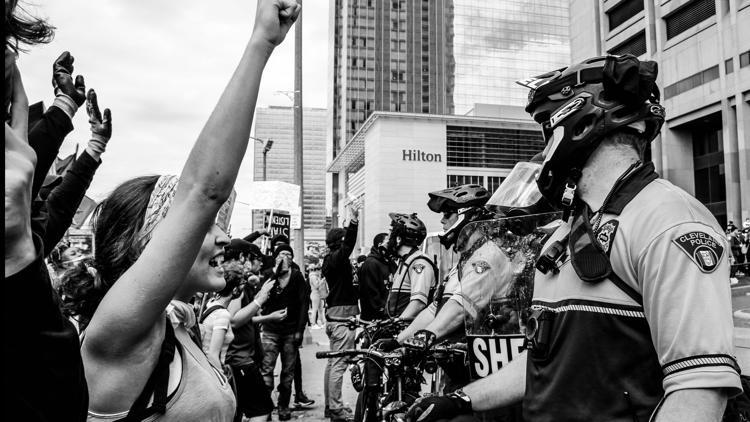 More than two dozen Cleveland officials and police officers are named in the lawsuit.

CLEVELAND — Editor’s note: The video in the player above is from a story published on Dec. 3, 2020.

Several Northeast Ohioans who took part in the May 30, 2020 protests in Cleveland have filed a civil rights lawsuit against Cuyahoga County officials and officers with the Cleveland Division of Police, claiming excessive use of force and false arrests during the rally protesting the death of George Floyd.

Floyd was killed by Minneapolis Police Officer Derek Chauvin on May 26 after the officer knelt on the man’s neck for nearly 10 minutes while Floyd repeatedly told Chauvin that he couldn’t breathe. Floyd’s death sparked national outrage over police brutality and led to hundreds of rallies across the United States and the world.

According to documents obtained by 3News, 13 plaintiffs have come forward alleging improper actions and violations of their civil rights on the date of May 30, 2020, and in the days that followed the downtown Cleveland ‘I Can’t Breathe’ rally.

The lawsuit, led by Sarah Gelsomino of Friedman, Gilbert and Gerhardstein, says that each of the 13 plaintiffs “never posed any threat,” yet were subjected to arrests and excessive force.

RELATED: City of Cleveland leaders say “mistakes were made” during May 30 civil unrest

The lawsuit also alleges that several of the plaintiffs were arrested and detained at the Cuyahoga County Corrections Center for days without probable cause. Charges against several of the protesters were later dismissed.

“The City of Cleveland, through its police department, and Cuyahoga County, through its Sheriff’s Department, were called to various areas of Downtown Cleveland to engage the protesters and allegedly keep the peace,” the lawsuit reads. “Yet, instead of protecting free speech under the First Amendment, many peaceful protesters were attacked, falsely arrested and/or charged without justification or probable cause, and worse yet, detained for multiple days in the Cuyahoga County Corrections Center and falsely charged with crimes.”

The lawsuit publicly names more than two dozen Cleveland police officers for misconduct on May 30.

One plaintiff, Shaina Bernard, says that she was peacefully protesting in front of the Justice Center in Cleveland when she was pepper-sprayed by a Cuyahoga County Sheriff’s deputy. Bernard also says she was left with nerve damage in her hands after officers supplemented zip ties for handcuffs and then closed the ties too tightly.

Several other plaintiffs claim that they were detained for days and that their belongings were not given back to them upon their release.

“Peaceful protesting and assembly are fundamental constitutional activities protected by the First Amendment to the United States Constitution,” the plaintiffs claim. The group also states that the “actions of citing, arresting, and imprisoning Plaintiffs for days, and charging them with crimes, were at least partly – if not solely – motivated by Defendants’ response to the individual Plaintiffs’ exercise of their First Amendment rights to protest and assemble peacefully.”

In December, Cleveland Mayor Frank Jackson and other city leaders said that mistakes were made on May 30, as Northeast Ohioans turned out to voice their

“For what went on that day, with our officers being attacked, I think they did a very good job,” Cleveland Police Chief Calvin Williams said at the time.

Editor’s note: The video in the player above is from a story published on June 10, 2021.