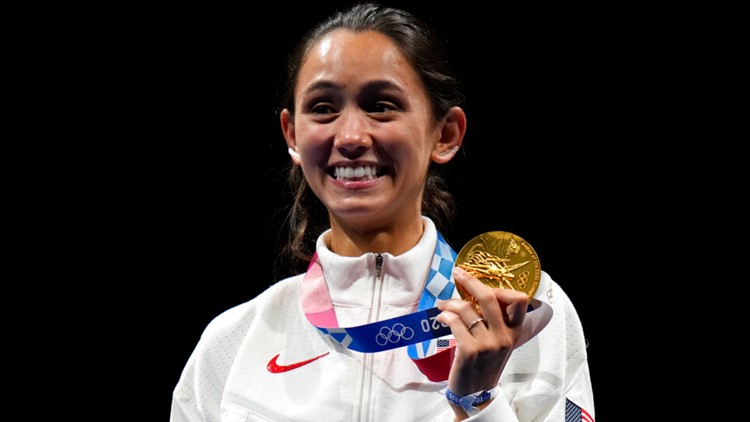 Kiefer made history as the first American to win an Olympic gold medal in individual foil.

TOKYO, Japan — Lee Kiefer has become a household name this morning after winning a gold medal Sunday in fencing. She appeared on NBC’s Today early Monday to discuss the special moment.

“I still don’t feel like it’s real,” Kiefer said. “My happiness comes from, like, the joy of my coach and my family at this point.”

Her husband, Gerek Meinhardt, is also an Olympic athlete in fencing. He said she “was just incredible” in her gold medal performance.

WATCH: You can see highlights from Kiefer’s victory HERE.

“She made my Olympic dream come true,” Meinhardt said on Today. “Being able to see her go out, fight her nerves and come out with the gold medal was something really special.”

With her win, Kiefer made history as the first American to win an Olympic gold medal in individual foil, according to NBC Olympics.

Kiefer, 27, who was born in Cleveland, is currently a third-year med student at the University of Kentucky. She previously competed in the 2012 London Olympics and the 2016 Rio Olympics, but never won a medal before.

USA Fencing lists her other honors as follows: