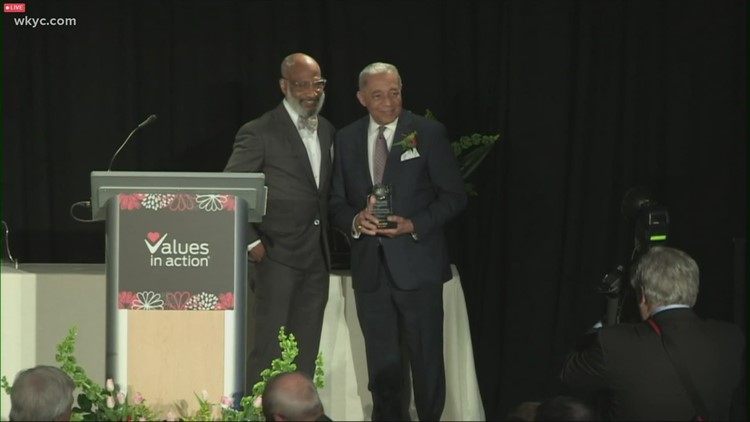 CLEVELAND — On Wednesday May 5, WKYC Studios’ Leon Bibb was honored with The Alan R. Schonberg Community Rescuer Award, which recognizes “unsung” heroes in our community who do good. The event was presented by Values-in-Action Foundation, an organization empowering individuals to build communities of kindness.  The award was given to Bibb by his former co-worker Obie Shelton, who worked with Bibb at WKYC Studios in the late 80s.

“Everyone is quite familiar with how Leon uses words to not only define and communicate our reality, but his kindness comes through and people get that and they understand it,” Shelton said during his introduction of Bibb. “It’s only fitting that kindness kind of began and launched him into being the Leon that we understand.”

In 1971, right out of college, Bibb started his career as reporter, photographer, and editor at a CBS affiliate station in Toledo. After nine months on the job and on one cold day, while he was driving to an assignment, he noticed and picked him up a hitchhiker. The hitchhiker played a major role in Bibb’s career because he knew the community affairs director at the NBC station in Columbus and he gave Bibb the community affairs director’s number. As a result, Bibb became the first African American primetime news anchor in Ohio.

But Bibb’s act of kindness didn’t stop there. Bibb is a Vietnam veteran, serves on the Salvation Army Greater Cleveland’s advisory board, Project GRAD Akron’s marketing committee and he and his wife established a scholarship at Bowling Green State University in 2014.

“Leon Bibb is a community rescuer who boosts the spirits of Cleveland through his decades-long story telling which piques the heart and challenges the mind. We are so proud that Values-in-Action was able to award Leon the Alan R. Schonberg Community Rescuer Award,” says Stuart Muszynski, President & CEO of Values-in-Action Foundation.

In 2007, the organization dedicated the Alan R. Schonberg Award to its long-time board chair for his philanthropic and mentoring work in Northeast Ohio and beyond.

The organization also has a Cleveland-focused initiative underway that aims to make our city the kindness place in the world. To learn more about the Kindland campaign and to take the Kindness pledge click here.

“Kindness should be a part of our everyday lives, says Bibb. “It doesn’t cost a dime to be kind. And everyone is looking for a little bit of kindness.”