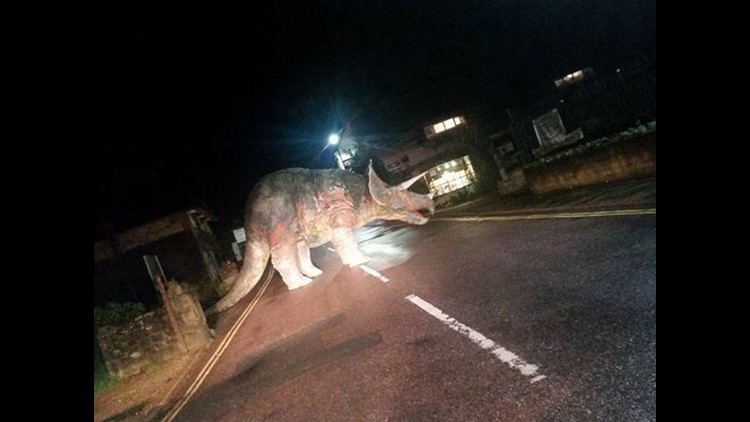 The dinosaur is part of an exhibit at the Shoppes at Parma, which is there until Sunday, June 27.

CLEVELAND — EDITOR’S NOTE: The video in the player above is from a previous, unrelated story.

A prehistoric treat is coming to kids at Cleveland Clinic Children’s. A life-size Triceratops will be appearing Thursday to brighten the kids’ day.

The Triceratops is part of an exhibit called “Dino Safari – A Drive-Thru Adventure” that’s currently appearing with more than 40 other life-size dinosaurs at the Shoppes at Parma. The dinosaurs will be on display through Sunday, June 27.

Dino Safari producer Tom Zaller, a University Heights native, is also donating tickets to Cleveland Clinic healthcare workers to attend the exhibit in Parma, as a “thank you” for their incredible work throughout the past year.

At the full exhibit in Parma, families can drive through to see the more than 40 life-like dinosaurs, including Parasaurolophus, Microraptor and T. rex. The exhibit features audio narration as families travel through “Pangea National Park,” for an up-close look at some of the biggest and most well-known dinosaurs.

The exhibit was created with paleontologist Dr. Gregory Erickson and features fact-based, educational content alongside an exciting storyline. Families of all ages get to learn about what dinosaurs ate, plus how they moved and behaved. But they should also be prepared for anything – including earthquakes and dino battles!

Tickets are priced per car, beginning at $49.95 per vehicle of up to seven individuals, and are available here. Advance purchase is strongly recommended.