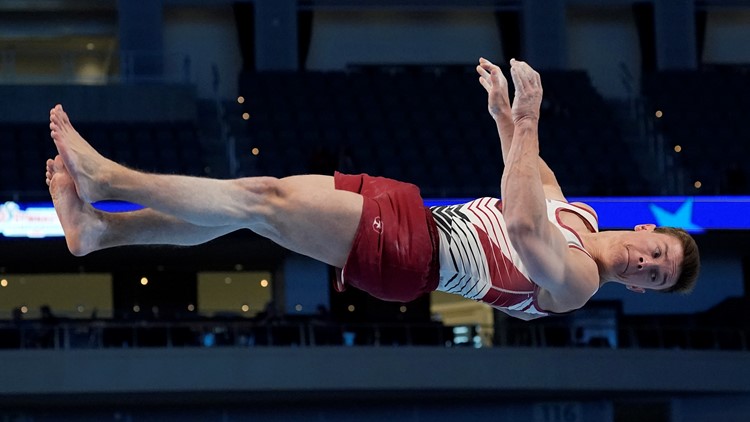 Despite Malone’s breakout performance, the Olympic selection committee is relying strictly on the trials in three weeks to determine the team.

FORT WORTH, Texas — Brody Malone’s summer calendar might be filling up quickly.

The 21-year-old won his first U.S. men’s gymnastics title on Saturday night, shaking off an early miscue on parallel bars to post a two-day total of 170.700. The two-time NCAA champion’s victory gives him plenty of momentum heading into the U.S. Olympic Trials in St. Louis later this month.

Malone admitted Thursday he didn’t feel much pressure, calling competing for Stanford at the NCAA championships far more nerve-wracking. Staked to a sizable lead after a polished performance on opening night, he appeared ready to give it away after ending up on the mat in the middle of his parallel bars set, his first event during finals.

No matter. He responded by drilling his high bars set, where his 15.050 score was the best of the meet and the second-highest on any event.

Six-time national champion and two-time Olympian Sam Mikulak atoned for an uncharacteristically sloppy performance by surging from seventh to third. Still, another fall on pommel horse during the second rotation ended any shot at cracking the top two. Mikulak’s all-around score of 167.400 included an 84.950 on Saturday that served as the best of the night.

The Olympic selection committee is relying strictly on the performance at the trials to determine the five-man team. Malone has spent the last five months making a pretty compelling argument. He helped the Cardinal capture the NCAA team title in April and added an all-around title to bookend the one he earned as a freshman in 2019.

Brody, however, has had the luxury of a regular schedule thanks to the NCAA season. Moldauer, Mikulak and Shane Wiskus not so much.

Mikulak hadn’t competed in nearly 15 months before he stepped onto the podium on Thursday. The 29-year-old admitted he ran out of gas during his final two events and stressed he would use Friday to regroup. He was brilliant on floor exercise to start the night before losing steam late in his pommel horse set and hopping off.

It would be Mikualk’s only major misstep, a positive development for the lone constant in the U.S. men’s program since he made his first Olympic team in 2012. Mikulak saved his best moment for last, sticking the dismount on his high bar routine before roaring while pumping his fists.

Wiskus, who moved from the University of Minnesota to the U.S. Olympic and Paralympic Training Center in Colorado last fall, was poised to push for one of the top four spots before a nightmarish turn on high bar in his last event. Wiskus saw his hands slip off three times to drop all the way to ninth.

Brandon Briones, Malone’s teammate at Stanford, finished fourth. Allan Bower, who put off going to medical school for a year after the Olympics were pushed back to 2021 due to the COVID-19 pandemic, came in fifth.