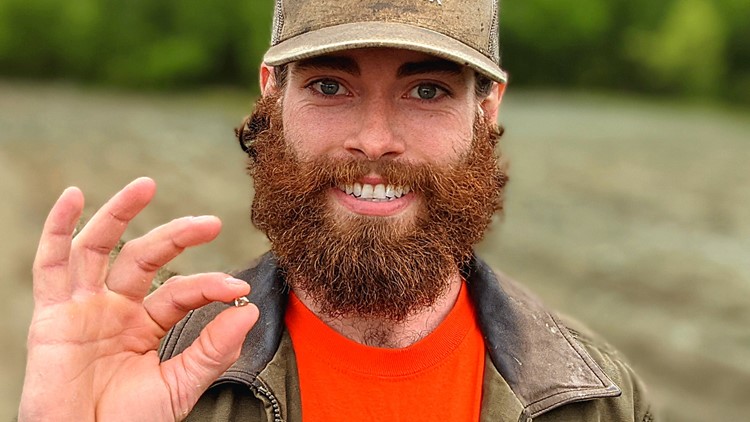 Christian Liden is traveling around America mining for materials to make an engagement ring and he found a 2.2 carat diamond at the Crater of Diamonds State Park.

MURFREESBORO, Ark. — A Washington state man who has been traveling around the country to make an engagement ring found a 2.2 carat diamond at Crater of Diamonds State Park in early May.

Christian Liden of Poulsbo, Washington came to Arkansas as part of his journey that started five years ago to create an engagement ring for his future wife, but the idea began back when he was in the eighth grade.

“Mr. Liden has dreamed of creating a special ring for his future wife, with stones and gold he mined himself,” said Assistant Superintendent Dru Edmonds. “And now he can make that dream come true!”

Liden traveled to Crater of Diamonds State Park on May 7 along with a longtime friend with their own mining equipment and on the third day he found the diamond that will be his center stone.

“I saw it shining as soon as I turned the screen over and immediately knew it was a diamond,” he said. “I was shaking so bad I asked my buddy to grab it out of the gravel for me.”

The large yellow diamond weighs 2.20 carats and is the largest diamond found at the park since October 2020.

Liden plans to travel to Nevada next where he will mine for opals. He said he wants to design an engagement ring with his bride-to-be using his diamond and other gemstones he has collected across the country.

He named the diamond the Washington Sunrise “because it’s got a nice, light yellow color just like sunlight in Washington.”