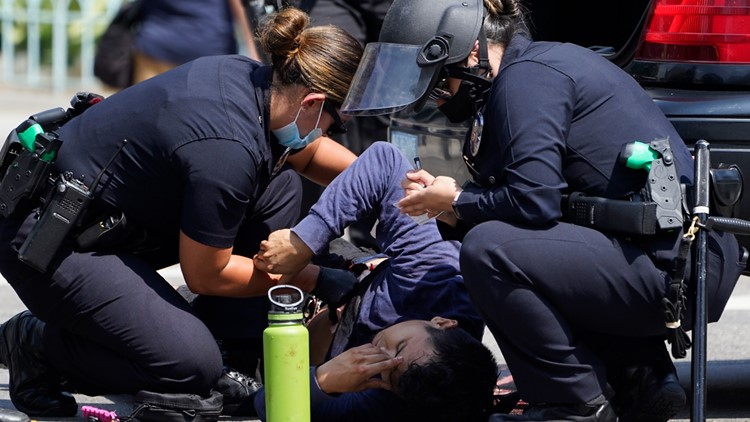 Punches and objects were thrown outside LA City Hall between a group defending vaccine and mask mandates and opponents who think they infringe on personal freedom.

LOS ANGELES — A man who was stabbed during dueling demonstrations in downtown Los Angeles over COVID-19 vaccine mandates has been released from the hospital, police said Sunday.

Spokesman Mike Lopez of the Los Angeles Police Department had no further information about the victim, and said Sunday that no arrests have been made in Saturday’s violence outside LA City Hall, where many punches and objects were thrown between a group defending vaccine and mask mandates and opponents who think they infringe on personal freedom.

Observers and at least one city official publicly decried the violence, and at least two reporters said they were assaulted by the anti-vaccine protesters. The anti-vaccine group said the stabbing victim was on their side, but that could not be confirmed.

Supporters of mandatory vaccinations, which are increasingly being required, gathered Saturday for a “No Safe Space For Fascists” rally, followed one hour later by a “Choose Freedom March” against “medical tyranny.” Video from the scene showed the anti-vaccination crowd yelling at the other side from across First Street — some of whom were filming the demonstration — then attacking them, hollering among other things, “Unmask them!”

Late in the afternoon, the LAPD declared an unlawful assembly.

“We are aware of one male that was stabbed and is being treated by LAFD,” the LAPD tweeted at 3:15 p.m.

Firefighters also responded to the gatherings.

“We made one transport to a hospital (from the demonstrations) but I don’t have any patient condition information,” Los Angeles Fire Department spokeswoman Margaret Stewart said.

The wounded man collapsed after being stabbed and at least one LAPD officer was seen trying to stop his bleeding before firefighters arrived. The injured man was reportedly a member of the anti-vaccine group, the Los Angeles Times reported, adding that he was taken to a hospital in serious condition.

Veteran reporter Frank Stoltze of KPCC and LAist said he was attacked in the park outside City Hall. It was unclear who attacked Stoltze, but LAPD Capt. Stacy Spell told Los Angeles Times reporters at the scene that a police report had been taken.

Stoltze later posted a message on Twitter saying, “Something happened to me today that’s never happened in 30 years of reporting. I was shoved, kicked and my eyeglasses were ripped off my face by a group of guys at a protest outside City Hall during an anti-vax, recall Gavin Newsom and pro-Trump rally.”

I’m mad but fine. There was a stabbing here today too – unclear if the victim was someone from the rally or a counter protester, say police, who were nearby. They made no arrest. Man is stable. There were peaceful families here on the South Lawn too https://t.co/CWT2ZW4AvS pic.twitter.com/aHYGu35u20

Reporter and podcaster Tina Desiree Berg posted photos and video of herself being attacked by a man who can be seen lunging forward and pulling down her mask.

Berg posted “I was just attacked with others” at the top of a lengthy Twitter thread showing photos and video of herself and others being approached by angry protesters.

I was just attacked with others pic.twitter.com/LVrtWFWFng

Many identified the man seen reaching for Berg’s mask as Tony Moon who tweets under the name “The Roof Korean” and videotaped himself at the riot at the U.S. Capitol on Jan. 6.

Others on Twitter claimed the LAPD did not manage the situation as aggressively as they do other types of protests.

“The LAPD are not serving or protecting the community today,” actress Rosanna Arquette tweeted. “They apparently are there to serve and protect violent Proud Boys and attack journalists. Dangerous supremacists have infiltrated the force. This is a big problem.”

One news station reported that members of the Proud Boys participated in the anti-vaccine demonstration. The group is a far-right, exclusively male organization that has been linked by the U.S. Justice Department to the Jan. 6 attack on the U.S. Capitol.

“LAPD allowed multiple attacks to happen while they and everyone else on Twitter has real-time access to video documentation of the attacks and who did them,” LCRWnews tweeted.

While some blamed Proud Boys “agitators,” others cited “Antifa rioters.”

“We are on scene to maintain order after a fight broke out between Antifa and people gathered for the permitted event,” the LAPD posted on Instagram. “No arrests have been made but investigation is ongoing.”

“These aren’t ‘patriots,”‘ Martinez said in a statement late Saturday. “Not wearing a mask and being anti-vax isn’t patriotism — it’s stupidity. We have to be able to have differences of opinions without resorting to violence. Attacking counter-protesters and journalists has no place in a democracy and certainly no place in Los Angeles.”

Gov. Gavin Newsom on Wednesday announced a statewide requirement for all teachers and school employees in the state to show proof of COVID-19 vaccination or submit to weekly testing. The Long Beach Unified School District, the second-largest district in Los Angeles County, announced the same policy last week.

Los Angeles County is requiring its employees to get vaccinated, and many large private employers are doing the same.

And AEG, owner of many of the Southland’s major concert venues, said Thursday that fans will have to be vaccinated to attend shows at its facilities, including the Roxy, the El Rey Theatre, the Fonda Theatre, the Shrine Auditorium and the Coachella Music & Arts Festival in Indio.