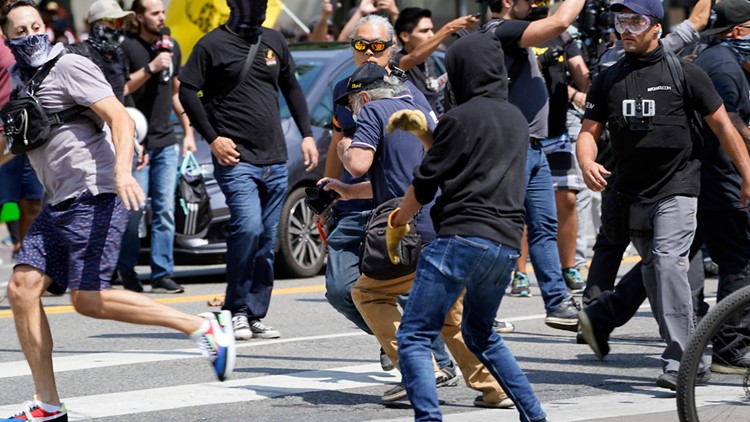 A fight broke out at a protest against vaccine mandates Saturday.

LOS ANGELES — A man was stabbed and a reporter was attacked Saturday at a protest against vaccine mandates on the south lawn of Los Angeles’ City Hall after a fight broke out between the protesters and counterprotesters, the Los Angeles Police Department and local media said.

About 2 p.m., a group of people holding American flags and signs calling for “medical freedom” arrived at City Hall around 2 p.m. for the rally, the Los Angeles Times reported. Counterprotesters gathered nearby.

About half an hour later, a fight broke out between the protesters and counterprotesters, the Times reported.

The LAPD said on its Twitter account that it is “aware of 1 male that was stabbed & is being treated by LAFD,” referring to the Los Angeles Fire Department.

The man was taken to a nearby hospital, where he is in serious condition, LAPD Officer Mike Lopez said.

“No arrests have been made but investigation is on going,” the department tweeted.

LAPD is monitoring a protest at the south lawn of the LA City Hall. We are on scene to maintain order after a fight broke out. We are aware of 1 male that was stabbed & is being treated by LAFD. No arrests have been made but investigation is on going. pic.twitter.com/0UwCgN55mJ

Counterprotesters could be seen spraying mace while members of the anti-vaccine rally screamed death threats, the Times reported.

KPCC radio reporter Frank Stolze was seen walking out of the park near City Hall being screamed at by anti-mask protesters, the Times reported. One man was seen kicking him.

Stolze told a police officer he had been assaulted while trying to conduct an interview, the Times reported.