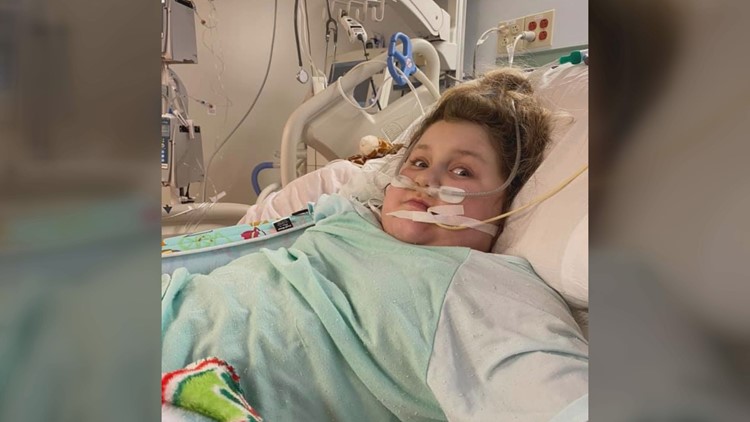 “The doctor came in with tears in his eyes and just said, ‘I have to vent your child,'” Mirsada Muric said. A week later, Blair began breathing on her own again.

On Saturday, Mirsada Muric finally heard Blair’s voice again as doctors took her little girl off of the ventilator.

“She still has fluid in her lungs, but she’s handling being off the ventilator really well,” Mirsada wrote. “SHE IS THRIVING. Thank you for all the prayers. God works.”

Blair, 9, has been fighting COVID-19 in the pediatric intensive care unit for more than a week. Most of that time was spent on the ventilator unable to communicate with her mother.

Now, Mirsada is watching her daughter’s personality come back and loving it.

“She is hungry, she is bored, she is sassy,” Mirsada said. “Continue to pray that she heals and doesn’t feel too many effects coming off of all this… she’s slowly healing and that’s all that matters to me.”

If this were any normal year, 9-year-old Blair Muric would be enjoying her first days of school.

Instead, she’s fighting for her life at East Tennessee Children’s Hospital in the pediatric intensive care unit.

“The doctor came in with tears in his eyes and just said, ‘I have to vent your child,'” her mother Mirsada Muric told 10News. “Her heart was trying to give out, so we had the talk of the DNR and just talks that I didn’t want to have.”

Blair has COVID-19. Her symptoms are so severe that she’s spent more than a week in the hospital.

“I cry when I just sit there and watch her,” Mirsada said. “You feel so much helplessness and you grieve for your child.”

It’s already been a challenging year for the Muric family. In February, Blair was diagnosed with a cranial meningioma, which her mother described as a tumor on her pituitary gland.

It was removed, but then Blair’s father died unexpectedly. Her mom said they think Blair contracted COVID-19 from someone at the service.

“I’m scared that she won’t fight because she wants to be with her dad,” Mirsada said. “Life has just been so tough this year, but we’re tougher.”

The emotional toll grew even tougher when Mirsada tested positive for COVID-19, too, and couldn’t visit her daughter.

“It just breaks my heart because, I know, she doesn’t know, but I know and I would want someone there,” Mirsada said. “Nobody was there with her.”

Mirsada hopes Blair’s story will help people will understand the dangers of this virus.

For families with young children, especially children like Blair who are at higher risk and currently unable to be vaccinated against COVID-19, she hopes people will choose to do their part to prevent it from spreading by getting vaccinated, wearing their masks, staying home when they’re sick and washing their hands to prevent anyone else from experiencing their pain.

Mirsada and Blair are accepting donations through GoFundMe.