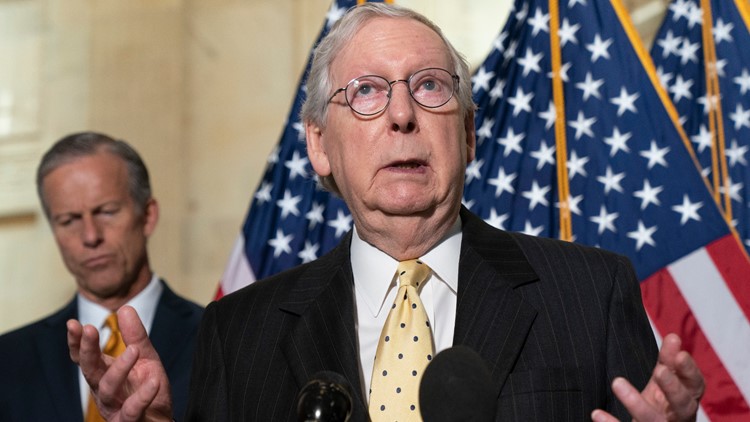 It’s a blow to Democrats who say an independent, bipartisan investigation of the siege is crucial to prevent it from happening again.

WASHINGTON — Senate Minority Leader Mitch McConnell said Wednesday he will oppose legislation to create a commission on the deadly Jan. 6 insurrection at the U.S. Capitol, a blow to Democrats who say an independent, bipartisan investigation of the siege is crucial to prevent it from happening again.

McConnell’s opposition comes a day after he said he was “open” to the bill that the House is expected to pass Wednesday. House GOP Leader Kevin McCarthy has also said he will not support the legislation.

Senate Majority Leader Chuck Schumer said Wednesday he will hold a vote on the bill despite the GOP objections, charging that Republicans are “caving” to former President Donald Trump, who encouraged his supporters to head to Capitol Hill that day to stop the counting of the electoral votes and overturn his defeat to Democrat Joe Biden.

Trump released a statement Tuesday night urging Republicans against approving what he called a “Democrat trap.”

The House was poised to vote on a 9/11-style commission on the deadly Jan. 6 insurrection at the U.S. Capitol, which would be a first step toward creating an independent, bipartisan panel that would investigate the siege and try to prevent it from happening again.

While the measure was expected to be approved Wednesday by the House, a commission will likely be a more difficult sell in the Senate. Republicans there are signaling that they will try to block — or at least slow down — the effort.

Senate Republican leader Mitch McConnell said Tuesday that he is “pushing the pause button” on the legislation to form the commission. While controlling the Senate, Democrats would need at least 10 GOP votes to pass the measure under Senate rules.

McConnell told reporters that his caucus is “undecided” but willing to listen to arguments about “whether such a commission is needed.” He questioned whether the panel’s work would interfere with the hundreds of criminal cases stemming from the Jan. 6 attack, in which rioters brutally beat police, broke in through windows and doors and hunted for lawmakers as they fled. McConnell said he also wanted to read the “fine print” of the bill and ensure that both parties on the commission have an equal say.

McConnell also questioned a separate $1.9 billion spending bill that the House is expected to pass this week for security upgrades. “We’re not sure what to spend the money on yet,” he said.

McConnell’s hesitancy came hours after House Republican leader Kevin McCarthy said he would oppose the bill. The two leaders’ positions will almost certainly mean fewer Republicans will support the commission in both chambers, as most in the party are still loath to upset former President Donald Trump. He had encouraged his supporters to head to Capitol Hill that day to stop the counting of the electoral votes and overturn his defeat to Democrat Joe Biden.

Trump released a statement Tuesday night urging Republicans against approving what he called a “Democrat trap.”

The votes in the House and Senate will also expose divisions in the party, as some Republicans have said they think an independent review is necessary.

In private GOP caucus meetings across the Capitol on Tuesday, members argued for and against the idea.

Several Republican lawmakers joined McCarthy in speaking against the commission early Tuesday during a meeting of House Republicans, according to one Republican familiar with the private session who spoke on condition of anonymity to discuss it. The Republican who negotiated the bill with Democrats, New York Rep. John Katko, argued in favor.

“I recognize there are differing views on this issue, which is an inherent part of the legislative process and not something I take personally,” Katko said in a statement. “However, as the Republican Leader of the Homeland Security Committee, I feel a deep obligation to get the answers U.S. Capitol Police and Americans deserve and ensure an attack on the heart of our democracy never happens again.”

McConnell said his caucus had “a good discussion” in their closed-door lunch.

Some Republicans, such as Missouri Sen. Roy Blunt, recommended that his colleagues oppose the commission. Blunt, the top Republican on the Senate Rules Committee, is working on a bipartisan report with his Democratic colleagues that will include some recommendations for security upgrades. He said an independent investigation would take too long and “frankly, I don’t think there are that many gaps to be filled in on what happened on Jan. 6, as it relates to building security.”

Other Senate Republicans have signaled support for the commission. Utah Sen. Mitt Romney said Tuesday that given the violent attack, “we should understand what mistakes were made and how we could prevent them from happening again.”

Modeled after the investigation into the Sept. 11, 2001, attacks, the bill would establish an independent, 10-member commission that would make recommendations for securing the Capitol and preventing another insurrection. The panel would have to issue a final report by Dec. 31.

The debate over the commission comes at a time when some Republicans have begun to downplay the severity of the Jan. 6 attack. And many Republicans say the commission should only be established if it can investigate other violent acts, including racial justice protests last summer following the killing of George Floyd by police. McConnell declined to answer a question about whether he agreed with that, despite advocating for a broader investigation earlier this year. On Tuesday, McConnell would say only that Republicans were “evaluating what is appropriate.”

Some have suggested that McCarthy himself could be subpoenaed by the panel because he talked to Trump as the Capitol was breached. Wyoming Rep. Liz Cheney, who was booted out of GOP leadership last week for her criticism of Trump’s false claims of a stolen election, suggested as much in an interview with ABC News, saying she “wouldn’t be surprised” if McCarthy was questioned in the investigation. Cheney has backed the commission.

Cheney and Katko are two of 10 Republicans who voted to impeach Trump after the insurrection for telling his supporters that day to “fight like hell” to overturn his defeat. The Senate later acquitted him.

House Speaker Nancy Pelosi, D-Calif., called McCarthy’s opposition to the commission “cowardice” and said he doesn’t want to find the truth. She released a February letter from the GOP leader in which he asked for an even split of Democrats and Republican commissioners, equal subpoena power and no predetermined findings or conclusions listed in the legislation. The bipartisan legislation accommodates all three of those requests, she said.

“Leader McCarthy won’t take yes for an answer,” she said.

Senate Majority Leader Chuck Schumer, D-N.Y., vowed to bring the House measure for a vote. “Republicans can let their constituents know: Are they on the side for truth or are they going to cover up?” Schumer said.

He questioned why Republicans even negotiate with Democrats “if the Republican leaders are just going to throw their lead negotiators under the bus.”

The Biden administration said that it supports the legislation and that the American people deserve “a full and fair accounting to prevent future violence and strengthen the security and resilience of our democratic institutions.”