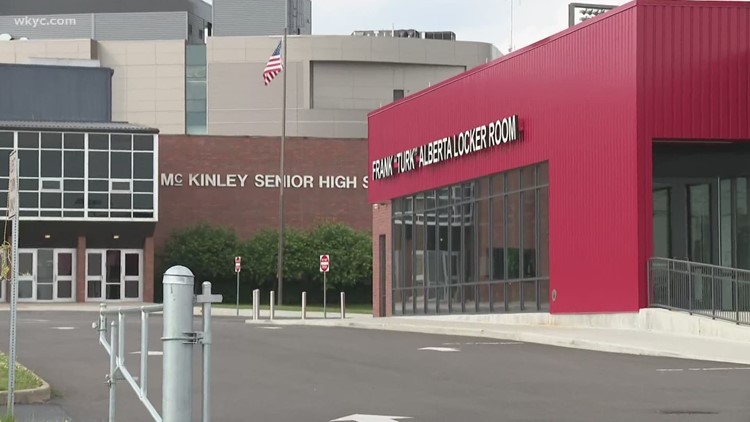 The coaches have sued the parent of the player involved, his attorney, school officials and others for defamation.

CANTON, Ohio — Six Canton McKinley high school football coaches who were fired when a father complained his son was forced to eat a pork-based pepperoni pizza in violation of his religious beliefs have sued the parent, his attorney, school officials and others for defamation.

The plaintiffs are former Canton McKinley head coach Marcus Wattley and five of his assistants.

The lawsuit filed Monday in Stark County said the player chose to remove pepperoni and cheese and eat the pizza instead of chicken nuggets when disciplined on May 24 for off-the-field behavior. Teammates ran laps for 20 minutes while carrying 45-pound (20-kilogram) weights as the teen sat in the middle of the gym and ate the pizza.

The coaches were unaware at the time that eating pork violated the player’s Hebrew Israelite religious beliefs, the complaint said. Following the incident, the coaches were placed on administrative leave pending the result of an investigation by Canton City Schools.

On June 3, Canton City School Superintendent Jeff Talbert called a special board meeting that resulted in the group of coaches losing their jobs.

The staff members that were let go were Frank McLeod, Josh Grimsley and Zachary Sweat.

Grimsley, who reported the incident to the player’s father and subsequently lost his coaching contract and job as a school resource assistant, was among those sued.

Following their termination on June 3, the coaches hired their own attorney in an effort to regain their jobs. They contended the student was given an option of eating chicken nuggets. It’s a claim the player’s attorney, Ed Gilbert, disputes.

Gilbert released video that he says contradicts claims that the student was not forced to consume a pepperoni pizza in violation of his religious beliefs.

You can watch the entire video in the player below:

Peter Pattakos, the attorney representing Marcus Wattley, disagreed with Gilbert’s versions of events, and said Gilbert is misinterpreting the video.

Pattakos issued a statement to 3News that read in part, “Now that the truth has come out, Gilbert is apparently desperate, and sadly unable to admit his mistake, so he has now decided to release the silent video and compound his lies about it, which continue to be unsupported by a single witness.”

Pattakos has continually said that Wattley and his staff did not force the student to eat pork against his religion.