It’s generally assumed Yelena Belova will replace Natasha Romanoff as the new Black Widow in the MCU – but she could actually become the villainous Red Widow instead. The MCU’s Phase 4 largely appears to orient around the idea of so-called “legacy heroes” – characters who inherit the mantle of another, more well-established superhero. Already Sam Wilson has become the next Captain America, and it won’t be long before viewers are introduced to Kate Bishop’s Hawkeye and Kamala Khan’s Ms. Marvel.

Given this is the case, the general assumption is that Yelena Belova, who will be introduced in Black Widow and played by Florence Pugh, will ultimately become Natasha Romanoff’s successor. While that would fit well with the overarching thrust of the MCU’s narrative, Marvel may go in a different direction. While Yelena did indeed replace Nat as Black Widow on one occasion in the comics, she’s much more a “shades of gray” character. What’s more, in December 2019, Pugh told Uproxx that Black Widow “certainly didn’t feel like a passing of the torch kind of film when we were making it.” That suggests something else is going on – and that Yelena Belova has an MCU future that’s entirely separate from the Black Widow mantle.

A recent interview with David Harbour may have offered an important hint, though. Far from turning Yelena into Black Widow, it’s quite possible Marvel intends to transform her into another character from the comics – Red Widow.

In the comics, the Red Widow was one of the most dangerous products of the Red Room, and she’s so twisted she terrifies even Count Dracula. She was brought into the project when she was just seven years old, a homeless girl whose life was given structure and meaning by the harsh and intensive program of training and mental manipulation she underwent, and her body was left covered in scabs and scars. Although the Red Widow lacks superpowers, she is a master combatant skilled enough to take on many members of the Avengers, and she’s a master of both armed and unarmed combat.

Russia recently decided to relaunch the Winter Guard, their version of the Avengers, and Red Widow became a key member of the team. Although she didn’t originally call the shots – Crimson Dynamo was nominally the group’s leader – Red Widow proved to have an authoritative attitude and a remarkable degree of tactical skill. She’s proved herself more formidable than any of the other members of the Winter Guard, the last one standing when they were attacked by Dracula’s Army of the Unliving – a remarkable feat given she lacks powers.

The Winter Guard May Be Coming To The MCU 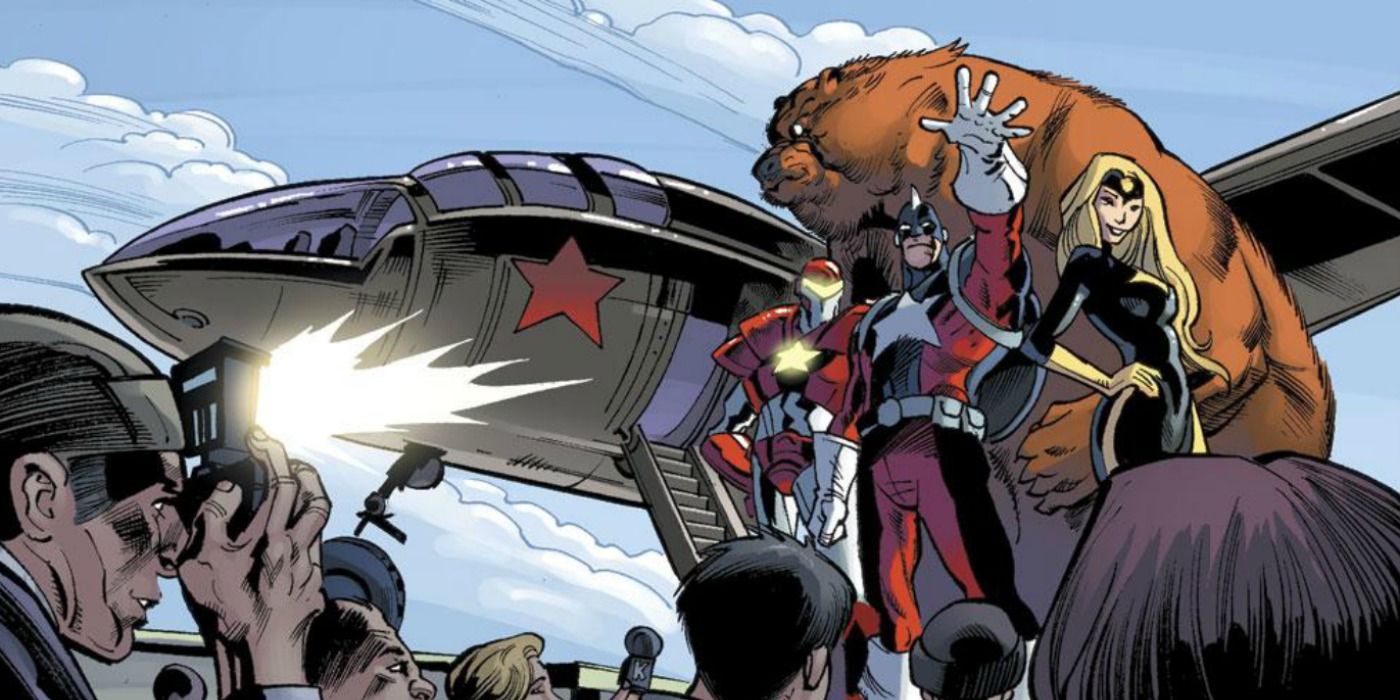 For some time, there’s been intense speculation Black Widow could serve to introduce the MCU’s version of the Winter Guard. Certainly, David Harbour is confirmed to appear in the movie as the Red Guardian, Russia’s answer to Captain America. In a recent post on social media, Harbour hinted the rest of the Winter Guard could turn up too. “Ursa, Yelena, Nat, CD, Sputnik, I and all the rest of the winter guard look forward to sharing a popcorn bag and a big ole screen in a dark theater with ya on July 9,” he wrote in an Instagram post; the comment refers to a number of other members of the Winter Guard. Ursa Major is a mutant with the power to turn into a giant bear, Crimson Dynamo wears Iron Man-style exo-armor, and Sputnik is a Soviet-era synthezoid. It looks as though Black Widow will give Russia its rival Avengers team.

Related: Black Widow: Everything We Know About Taskmaster’s Real Identity

All this raises the intriguing possibility Yelena Belova will not become the Black Widow at all; rather, she will be transformed into the MCU’s Red Widow – and most likely against her will. One curious shot in Black Widow trailers shows Yelena Belova being subjected to mysterious experiments, with the equipment branded with the logo of AIM, the villainous group last seen in Iron Man 3. Black Widow could end with Yelena captured, subjected to mind control experiments, and perhaps even enhanced in some way. This would potentially contextualize Natasha Romanoff’s story in Avengers: Endgame, too. Natasha might have believed Yelena was killed rather than captured; after the loss of her old family, she could resolve to make right by her new one in the Avengers.

And it would position Yelena Belova in a unique place for the MCU going forward. Rather than becoming the next Black Widow, she could be transformed into the MCU’s next big threat as the leader of a group of superhumans who are essentially the Avengers’ greatest rivals, always looking out for potential recruits. This would fit with reports that Yelena Belova will appear in Hawkeye, because she could be on the hunt for either Kate Bishop’s Hawkeye or Echo. That would certainly raise the stakes for the Hawkeye Disney+ TV series. But, of course, this doesn’t mean Yelena Belova’s story will necessarily end with her as the Red Widow. Such an arc would be a fascinating one, in that it would compel a number of key Marvel characters to find a way to redeem Yelena. Clint Barton would be keen to find a way to rescue the surviving member of Natasha’s family from her fate, while Bucky Barnes would be unable to resist the idea of freeing someone from the same kind of brainwashing he endured for decades under Hydra’s control.

David Harbour’s Instagram post really has opened a lot of possibilities for Black Widow and helped explain why this film could be so important to Marvel’s Phase 4 slate. It looks set to rewrite the history of the MCU, revealing a long-standing super-soldier arms race that was part of the Cold War, and extending that into the present day. It will be interesting to see how the Winter Guard, and potentially a brainwashed team leader, fit with the Sokovia Accords. The most likely scenario is that Russia’s Avengers start out operating in the shadows, unseen by the world, recruiting key assets and building up a whole new power base. Black Widow could well lay the foundation for a fantastic arc.

More: Black Widow Was The Only Civil War Avenger Who Was Right (Not Cap Or Iron Man)

Is MODOK In The MCU? Marvel Canon Explained

Tom Bacon is one of Screen Rant’s staff writers, and he’s frankly amused that his childhood is back – and this time it’s cool. Tom’s focus tends to be on the various superhero franchises, as well as Star Wars, Doctor Who, and Star Trek; he’s also an avid comic book reader. Over the years, Tom has built a strong relationship with aspects of the various fan communities, and is a Moderator on some of Facebook’s largest MCU and X-Men groups. Previously, he’s written entertainment news and articles for Movie Pilot.

A graduate of Edge Hill University in the United Kingdom, Tom is still strongly connected with his alma mater; in fact, in his spare time he’s a voluntary chaplain there. He’s heavily involved with his local church, and anyone who checks him out on Twitter will quickly learn that he’s interested in British politics as well.