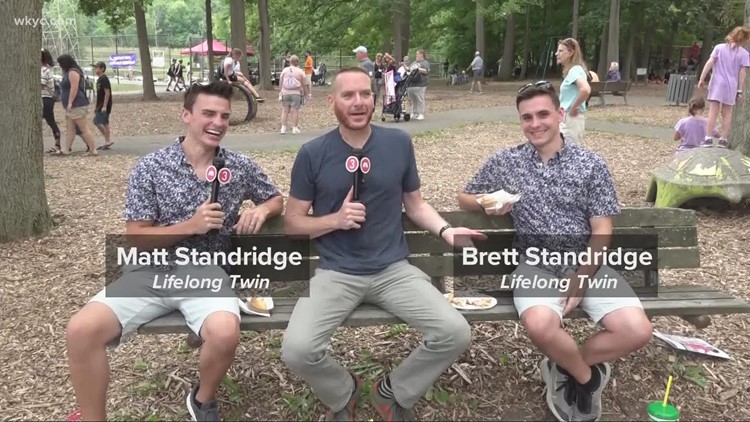 And the Standridge twins try to help Mike conquer his discomfort, while addressing their own fraternal twin inferiority complex

TWINSBURG, Ohio — Thanks to the surprisingly dark (for Disney that is) 1990 John Goodman film, we all know that “Arachnophobia” is the fear of spiders.

If that movie didn’t manage to give you the creeps but the Stephen King novel “It” did, there’s a good chance you might suffer from at least a mild case of “Coulrophobia” or, the common fear of clowns.

If you’ve only seen the film adaptations of “It” but refuse to read the novel because you’re scared of books for some reason, there’s a word for that too: you’re “bibliophobic.”

It seems like science has come up with a technical term to describe almost every unique fear that we timid humans tend to hold, but damned if I can find the word for mine.

Perhaps I’m just missing it.  Someone help me out: What’s it called when you have an irrational fear of twins?

Maybe “fear” is too strong of a word. I don’t believe twins are a particular threat to my person or that they wish to do me bodily harm.

When I encounter twins in public I’m not under the impression that they’re using some telepathic form of twin-speak to discuss the best way to steal my soul. I’m fairly certain of this.

So I’m not necessarily SCARED of twins, I just find them unsettling. Like seeing someone flying a kite at night, or hearing a French rapper rapping in his native language. There’s just something not quite right about it.

I think it’s primarily rooted in the disturbing exhibition of genetic symmetry that twins present. I’ve always felt like humankind has had an unspoken understanding with nature, the deal being that nature has every right to produce us in any vast variety of ways, for better or worse.

Some people are tall and some are short, some have a cleft chin or a unique eye shape. This is all based on an expansive combination of countless genetic traits that all forge together to create one totally unique individual.

That is unless something very specific and very weird happens that causes two people to share the same genetic makeup and consequently appearance.

That’s when the creepiness kicks in.

Of course, it doesn’t help the situation when my doppelgänger tormentors insist on maintaining their sameness into their adulthood by keeping similar hairstyles and continuing to dress alike into their autumn years. This is a decision that I’ll admit I’ve never been able to comprehend.

It’s one thing when the parents of twins dress their double babies in adorable and/or humiliating matching outfits for photographic or family get together purposes, those kids have no say in how they’re adorned.

But when grown twin adults choose to keep dressing and looking the same of their own volition just for the love of the twin game, that’s when I can no longer abide such nonsense.

I suppose I should make an exception and call a moratorium on my “Adult Twins Shouldn’t Dress Alike” principle when it comes to the annual Twins Days celebration in Twinsburg, where twins gather from all over the world to commune with other multiple-birth siblings. This is after all intended to be a celebration of uncanny similarity, so I really have no right to protest.

Despite this, during my recent return to Twins Days, I still felt ill at ease in my surroundings as I once again immersed myself in that which disturbs me in an attempt to overcome my anxiety.

Joining me in my attempt to address that fear was 3News’ very own Matt Standridge – and spoiler alert – he’s actually a twin himself! So thanks to Matt and Brett Standridge for accompanying me to the largest annual gathering of twins and multiples in the world!

Join us, as I once again fail to conquer that fear: A fear for which I can not find a name.

RELATED: Mike Polk Jr. has some thoughts on the 2020 Tokyo Summer Olympics

RELATED: The Odd-lympics: Strangest Olympic sports from over the years with Mike Polk Jr.