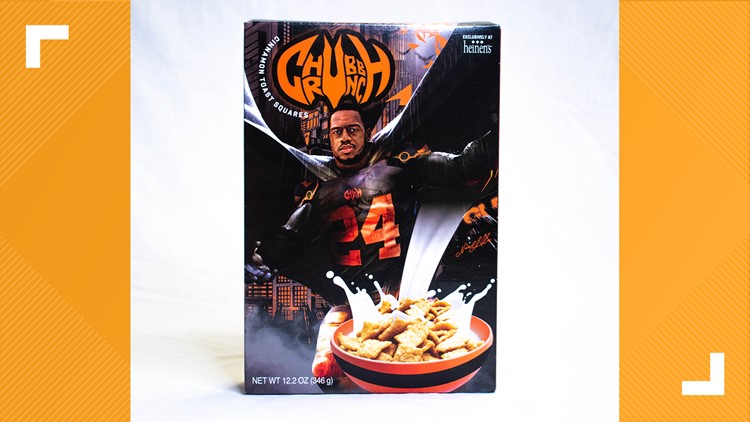 Four months after it was first announced, Nick Chubb’s cereal is now a reality.

Originally announced in April, “Chubb Crunch” is produced in partnership with PLB Sports and Entertainment, the same company responsible for such celebrity cereals as Patrick Mahomes’ Mahomes Magic Crunch, Doug Flutie’s Flutie Flakes, Josh Allen’s Josh Jaq’s and Barstool Sports Pardon My Flakes. A portion of the proceeds from the Cinnamon Toast Crunch-like cereal will benefit First Candle, an organization committed to eliminating Sudden Infant Death Syndrome (SIDS) and other sleep-related infant deaths through education while providing support for grieving families who have suffered a loss.


“I’m excited to release Chubb Crunch with PLB Sports and Entertainment,” Chubb said in a release. “It’s always been a dream to have my own cereal, especially one that benefits a cause that is close to my family.”

The box for “Chubb Crunch” features the 25-year-old running back depicted as Batman, a superhero he has paid homage to with his clothing since being selected by the Browns in the second round of the 2018 NFL Draft. Earlier this month, the two-time Pro Bowl selection signed a three-year, $36.6 million extension, which will keep him under contract in Cleveland through the 2024 season.

Entering his fourth season with the Browns, Chubb is coming off a 2020 campaign in which he rushed for 1,067 yards and 12 touchdowns in 12 regular-season games.