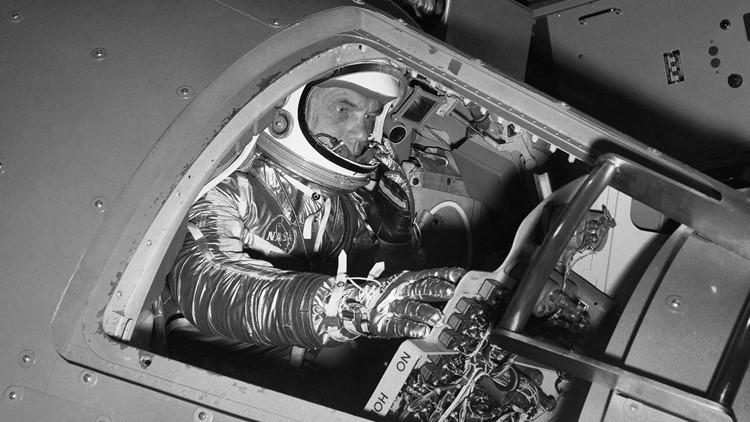 John Glenn has been honored over the weekend with a three-day festival in Ohio marking what would have been the history-making astronaut’s 100th birthday.

NEW CONCORD, Ohio — John Glenn has been honored over the weekend with a three-day festival in Ohio marking what would have been the history-making astronaut and U.S. senator’s 100th birthday.

Glenn, who died in 2016, was the first American to orbit Earth, making him a national hero in 1962. Before that, he served as a military fighter pilot in World War II and the Korean War and set a transcontinental air speed record. In 1998, he became the oldest person ever to go into space at 77. He spent 24 years as a Democrat in the U.S. Senate.

The John Glenn Centennial Celebration Friday to Sunday was a collaboration between Cambridge, where Glenn was born on July 18, 1921, and nearby New Concord, where he grew up and met his late wife, Annie, who died last year at 100 of complications from COVID-19.

Lyn Glenn, the late senator’s daughter, watched parade floats go by Saturday from the front porch of her father’s boyhood home, a place she felt at home, too.

“We moved around a lot as a family, and so they always brought us back here for holidays because this is the most consistent place in my life,” she told the Zanesville Times Recorder. “Coming back here is so familiar, and it’s so personal as well.”

RELATED: Hubble Space Telescope fixed after month of no science

The paper reports that one admirer after the other approached Lyn Glenn throughout the day to share their memories, and they included Glenn Schuck, a reporter from New York City named for her father a few years after his orbit of the planet.

Edward and Jill Schuck wrote to John Glenn letting him know they’d be naming their son after him, not expecting a response. Instead, they got a letter from NASA with photos signed by Glenn for his namesake in New Jersey and a letter to the boy’s parents saying he was honored by their gesture.

Those correspondences would continue throughout Schuck’s childhood. In 1969, when Schuck was 5, Neil Armstrong walked the moon. John Glenn made sure to have signed photos sent to Schuck to commemorate the historic occasion.

“I would get stuff from him like all the time in the mail without even asking,” Schuck said.

The weekend’s festivities were also to include a presentation by ex-shuttle astronaut and fellow Ohioan Don Thomas, rocket car rides, space movies and rides in the type of biplane a young Glenn flew over Cambridge. Other commemorations of Glenn’s birth a century ago are planned in the area all month.