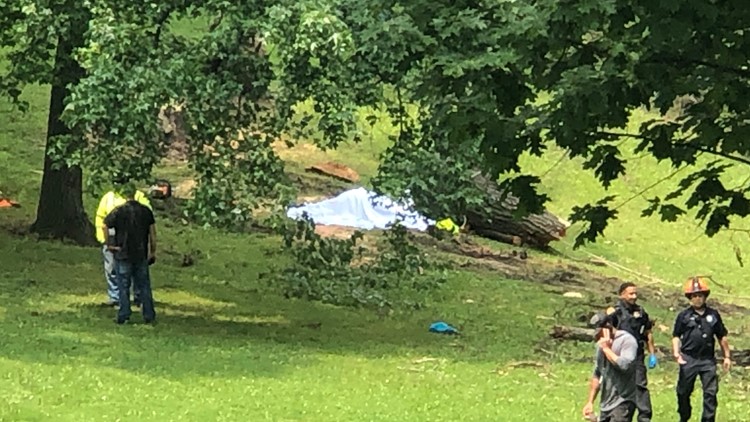 This is a developing story. Check back at wkyc.com as more details become available.

CLEVELAND — The Cleveland Division of Police is investigating today after a City of Cleveland arborist was struck and killed by a falling tree Wednesday afternoon.

3News crews were on the scene at Martin Luther King Jr. Drive in Cleveland where ambulances and first responders were sent following the incident. Police were unable to provide details but did confirm that one person, later identified as Sean Hudson, had died from the incident.

Late Wednesday afternoon, a representative for the City of Cleveland released a statement on the tragic death of the worker.

“The City of Cleveland was made aware of a fatal accident this afternoon involving an employee at a jobsite,” the representative told 3News.
We are saddened and still awaiting details of the incident. Out of respect for the employee, their family and our co-workers, we ask for your patience and updates will be shared as soon as they are available.”

“Mayor Frank G. Jackson and the City of Cleveland offer our condolences to the family, friends and co-workers of Mr. Sean Hudson. Sean was a City arborist, who passed away on July 14 after a fatal accident at one of our job sites. He began his career with us in 2017. Sean was a valued and dedicated employee, held in the highest regard by his co-workers,” said Mayor Frank G. Jackson in a statement Wednesday night. “He was a husband, father and friend who will be missed. To help our employees, grief counselors are available starting tomorrow. The safety of our workforce is of the utmost importance and per protocol, we will conduct a thorough investigation into today’s incident.”

Editor’s note: The video in the player above is from an unrelated story, published on July 1, 2021.

RELATED: ‘I did not do this:’ Suspect identified, arrested more than 20 years after Cleveland rape pleads not guilty