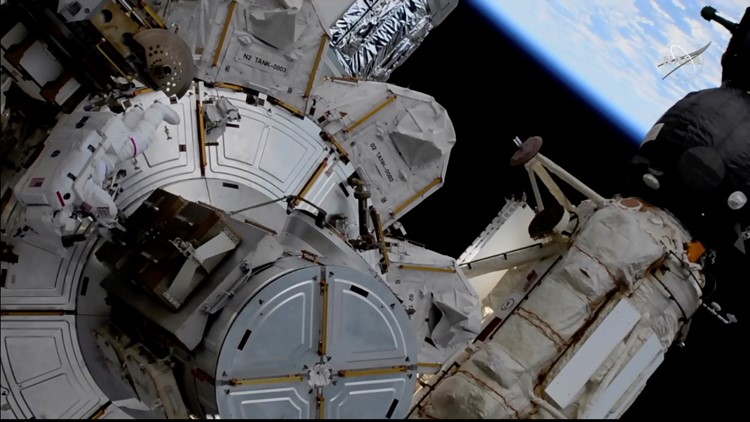 The gear will help the primary set of improved photo voltaic panels, attributable to arrive in June.

CAPE CANAVERAL, Fla. — For the second time this week, a pair of astronauts floated exterior Friday to get the Worldwide Area Station prepared for brand new photo voltaic panels.

NASA’s Kate Rubins and Japan’s Soichi Noguchi headed towards the unfinished work from Sunday’s spacewalk, positioned on the far port finish of the orbiting lab. They wanted to complete putting in mounting brackets and struts, and tighten some sticky bolts.

The gear will help the primary set of improved photo voltaic panels, attributable to arrive in June.

NASA is upgrading the house station’s energy grid to accommodate extra astronauts and experiments, now that SpaceX is launching crews and Boeing needs to be too by 12 months’s finish. The eight photo voltaic panels up there now have degraded over time; the oldest had been launched 20 years in the past.

The six new photo voltaic wings — smaller however extra environment friendly — will match over the older ones and increase the station’s energy functionality by as much as 30%. Boeing is supplying the panels, which can be launched in pairs by SpaceX over the subsequent 12 months.

NASA determined the leftover work was extra essential than the opposite chores that had been scheduled for Friday’s spacewalk, specifically venting and rearranging hoses for ammonia coolant. Future spacewalkers will cope with that.

The most recent spacewalk needs to be the final for the station’s present residents, whose half-year missions are coming to an in depth.

Rubins will return to Earth in mid-April in a Russian capsule, together with two Russians. Noguchi, Glover and two different NASA astronauts will fly SpaceX again in late April or Could.


RELATED: Biden thanks NASA workforce for giving US ‘dose of confidence’

RELATED: NASA hid a secret message within the Mars rover’s parachute. Somebody solved it in a pair hours.

How close is Ohio to reaching 50 COVID cases per 100,000?
Previewing Ohio State vs. Illinois | Locked On Buckeyes
Comment