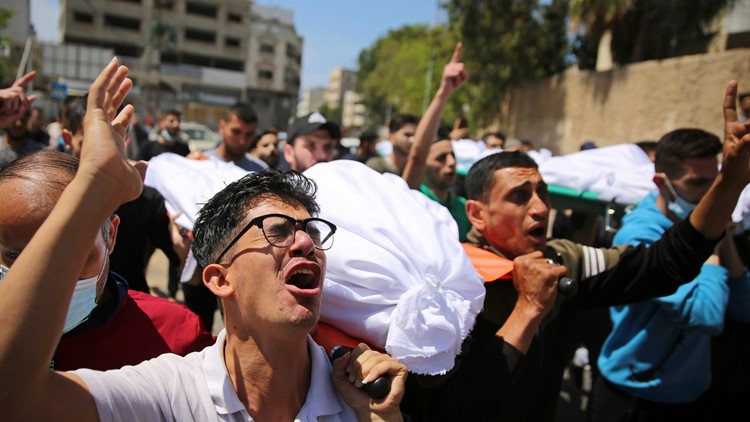 As in the United States, a brutalized minority group, facing systemic racism and discriminatory acts, has taken to the streets.

The Conversation is an independent and nonprofit source of news, analysis and commentary from academic experts

The images and reports coming from Israel, Jerusalem and Gaza in recent days are shocking. They are also surprising to those who thought the 2020 Abraham Accords and subsequent agreements to normalize relations between Israel and the United Arab Emirates, Bahrain, Morocco, and Sudan would place the conflict between Israelis and Palestinians permanently on the backburner.

As someone who has been writing and teaching about the Middle East for more than 30 years, I had no such illusions. The reason for this is that at its heart, the so-called “Arab-Israeli conflict” has always been about Israelis and Palestinians. And no matter how many treaties Israel signs with Arab states, it will remain so.

In a phone call on May 12, President Joe Biden assured Israeli Prime Minister Benjamin Netanyahu of his “unwavering support for Israel’s security and for Israel’s legitimate right to defend itself and its people.” Biden was referencing the rocket attacks on Israel launched by Hamas, the Islamist group that governs Gaza. By targeting civilians, Hamas is committing a war crime. In all probability, so is Israel, by bombing and shelling Gaza.

Despite the carnage the Hamas rocket attacks and Israeli retaliation inflicts on Israelis and Gazans, the Biden administration is focusing on a sideshow, not the main event.

Hamas could not maintain its credibility as a movement if it sat by while Palestinians in Israel battled Jewish Israelis there. The reality is that Israel is having its Black Lives Matter moment.

But after the spate of Palestinian suicide bombings in the early 2000s that horrified Israelis and hardened their attitudes toward Palestinians, this is unlikely to occur.

Many reasons, one source

Palestinian anger can be attributed to multiple issues. In April, Israel attempted to impede accessto Al-Aqsa Mosque in Jerusalem for Palestinians living in the West Bank. Israeli police then raided the Muslim holy site, reportedly after Palestinians threw stones at them, injuring 330. At the beginning of May, Mahmoud Abbas, the current president of the Palestinian Authority, which governs the West Bank, cancelled the first Palestinian legislative elections in 15 years. Finally, when the current conflict spilled over into the West Bank, the Israeli occupation and continued colonization of Palestinian territory were thrown into the mix.

These significant issues explain Palestinian anger. However, the intercommunal nature of the ongoing conflagration is due to two other issues.

First, Jewish settlers attempted to evict eight Palestinian families from their homes in the Sheikh Jarrah neighborhood of Jerusalem. The United Nations Relief and Works Agency had settled the families in the neighborhood during the 1950s.

Jewish settlers filed suit in 1972 claiming their right to the homes where those families lived. They argued that Jews had owned the Palestinians’ homes before the division of the city in the aftermath of the 1948 Arab-Israeli War. By right, they argue, the homes belong to their community.

Jewish neighborhoods housing more than 215,000 encircle the predominantly Palestinian eastern part of Jerusalem, where Sheikh Jarrah is located. For Palestinians, the attempt to evict the families is representative of Israel’s overall policy of pushing them out of the city. It is not only a reminder that in a Jewish state Palestinians are second-class citizens, but a reenactment of the central tragedy in the Palestinian national memory: the Nakba of 1948, when 720,000 Palestinians fled their homes in what would become the state of Israel, becoming refugees.

Kahanism and like-minded movements are on the rise in Israel. A Kahanist was recently elected to the Israeli Knesset, or parliament, and Netanyahu courted his support when the prime minister was attempting to form a government in February, 2019. Kahanists and other ultranationalist thugs — the “Proud Boys” of Israel — march through Palestinian-Israeli neighborhoods chanting “Death to Arabs” and assault them.

The current crisis began on May 6, 2021. Pro-Palestinian protesters in Sheikh Jarrah had been breaking the Ramadan fast together each night of the holiday, a custom called iftar. On this particular night, Israeli settlers set up a table opposite them. In the settlers’ group was Itamar Ben-Gvir, the Kahanist deputy. Rocks and other objects began to fly. Then the violence spread.

[Over 100,000 readers rely on The Conversation’s newsletter to understand the world. Sign up today.]

The fighting began after a funeral of a Palestinian man who was killed by an assailant presumed to be Jewish. It was so heavy at times that the Israeli government brought in border guards from the West Bank to quell the unrest. The mayor characterized what was happening in his town as a “civil war.”

The mayor also reminded the residents of Lod, “The day after, we still have to live here together.”

He did not explain how this was to happen.