Home » Paralympics ready to take over spotlight from Olympics 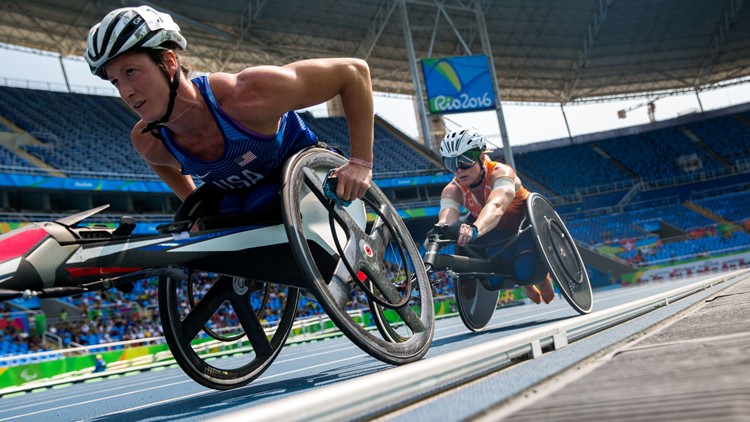 US wheelchair racer, Tatyana McFadden, already has 17 Paralympic medals under her belt. Now, she prepares for Tokyo with the hopes of bringing home more gold.

WASHINGTON — Editor’s note: The attached video is from the AJC Peachtree Road Race in July 2021.

Now that the pandemic-delayed Tokyo Olympics have ended, it’s time to gear up for the Paralympics right around the corner.

Tatyana McFadden, 17-time Paralympic medal winner and one of the top female wheelchair racers, is preparing for her sixth Games with the hopes of earning more medals for Team USA.

However, the journey hasn’t always been easy for McFadden.

McFadden, considered to be the fastest woman in the world, was born with Spina bifida, a condition that impacts one’s spine. The Paralympian and World Major Marathon winner is paralyzed from the waist down and she spent the first six years of her life in a Russian orphanage before being adopted, according to her website.

At the age of 15, she was the youngest Team USA member to compete at the 2004 Athens Paralympic Games and brought home a silver and bronze medal. Despite coming back to the United States as a Paralympic medalist, she had to fight for equality along the way, and she still is.

“My advocacy actually started at a really young age,” McFadden said in a phone interview. “I was in high school when I came back from the Athens Games in the Paralympics… and all I wanted to do was be on my high school track team. When I wanted to try out… they wouldn’t let me.”

She added that the team wouldn’t even give her a uniform at events. When she was given the chance to compete, she said the entire event would be stopped for her to race around the track by herself.

“I thought, ‘this is not what life should be for people to participate in their high school sports,'” she said, adding that she wanted to make sure other people with physical disabilities, like her sister Hannah McFadden, had an opportunity to compete.

So, McFadden and her mom did something about it. They sued the school, not for damages, but for the right to participate in high school sports equally.

In the end, they won their case, and the push for equality paved the way for so much more. It eventually became a state law in Maryland, then it became a federal law. “Tatyana’s Law” was passed during the Obama administration in 2013 and requires schools to allow students with disabilities to compete in interscholastic athletics.

“I wanted to make a change in the Paralympic world by having that younger generation come up, and having those rights to not have to fight for that,” she recalled.

On Tuesday, McFadden boarded a plane for Tokyo to attend training camp ahead of the Paralympic Games, which just like the Olympics were postponed a year due to the ongoing coronavirus pandemic.

RELATED: How to watch the 2020 Tokyo Paralympics

Thanks Miss Mills for being so wonderful and helping me check in today ☺️ the trip to #tokyo offical begins ❤️🤍💙 pic.twitter.com/qFfwWXZsec

This year will also be the first time U.S. Paralympians are paid as much as Olympians.

In 2018, it was announced the U.S. athletes would earn the same amount for medal performances. The Tokyo Olympics are the first Games where this rule will take place. The U.S. Olympic Committee did retroactively pay 2018 Paralympians the higher amounts afterward.

“I’ve been competing at the Paralympics for 15-16 years, and this is the first time that I’m going to get equal pay,” McFadden said. “I mean, this is my job, right? This is what I do. I’m a professional athlete, and I think it’s such a turning point because I actually feel valued.”

RELATED: How much is an Olympic gold medal worth? A lot less than you think

In the days leading up to McFadden’s trip to Japan, she has been excited to see how the Paralympics were being promoted and represented right alongside the Olympic competitions.

“You’re seeing in Tokyo the volunteers wearing the shirt of the Olympics and Paralympics logos. That’s awesome to see both,” McFadden described. “All those little changes people are seeing it. They’re also saying the name, which before they weren’t. I love being part of this journey and part of the change.”

The International Paralympic Committee says the word Paralympics is derived from the preposition “para” meaning beside or along and Olympic. “Its meaning is that Paralympics are the parallel Games to the Olympics and illustrates how the two movements exist side-by-side,” the IPC said.

“That’s so important for me to fight for equality in sports because so many people will have fought for me to have access at the Paralympic Games,” McFadden said.

In recent years, equality in sports has extended beyond the games to commercials and ad campaigns. Companies like Powerade, who McFadden has partnered with for its “Power In Numbers” campaign, are showcasing Olympians and Paralympians.

“You know, without the support of my sponsors, I couldn’t do it,” she said. “I would not be a world champion because our sport is so expensive.”

Wheelchair racing equipment is expensive. McFadden said the racing chair alone could cost around $9,000, with each of the three wheels setting someone back $4,000 each. She said that tires are “$115 apiece, and in one week I went through six of them.”

“Then on top of that, you need housing, you need food, you travel,” she said. “I just couldn’t do it without that support. So it’s very exciting that this will be the very first Games for me for equal pay, and I think a lot of Paralympic athletes are definitely feeling valued.”

“I just want people to know that [Paralympics are] just as exciting as the Olympics, if not more because these athletes are absolutely amazing,” McFadden explained. “Of course track and field with wheelchair racing is also really exciting because it’s literally like watching NASCAR on the track the way that we strategize in races and how fast we go using our arm strength.”

The Games are scheduled to take place from Aug. 24 through Sept. 5.