From crews on the front line, to journalists, and even residents, the stunning images offer a glimpse into the devastation, fear, and loss from the Dixie Fire.

PLUMAS COUNTY, Calif. — The Dixie Fire, burning in Northern California for the last three weeks, has quickly become one of the largest wildfires in state history. And after it swept through the town of Greenville, Calif., on Thursday, Aug. 4, it also become one of the most destructive.

A steady stream of photos and videos of the fire have circulated online and on social media. From fire crews on the front line, to journalists, and even residents living around the area, the stunning images offer a glimpse into the devastation, the fear, and the loss rippling through the impacted communities.

The following is a collection of some of the scenes from the Dixie Fire:

ABC News shared a compilation of videos showing firefighters on the frontline of the River Fire.

“This is what it looks like behind the fire lines.”

We just entered Greenville on Hwy 89 This video was taken from Bidwell & Ann St. I’m so sorry for the town of Greenville. #DixieFire pic.twitter.com/vtAiYpy1Dl

Multiple structures fully involved along HWY 36 just west of Lost Creek Rd. The house in the middle that is not involved in this video was unfortunately impacted shortly after this was taken #DixieFire pic.twitter.com/Tl93HMaa4U

ABC10 reporter Giacomo Luca has been covering the Dixie Fire in Northern California. Here is a collection of his photos from the town of Chester, Calf.


ABC10 reporter Giacomo Luca has been covering the Dixie Fire in Northern California. Here is a collection of his photos from the town of Greenville, Calf.


ABC10 reported Monica Coleman stopped in Greenville for a firsthand look at the destruction.

Morning sunrise reveals the damage done by the Dixie Fire that burn through the town of Greenville pic.twitter.com/Mm2YITpuek

A Snapchat user in the Crescent Mills area records videos showing large plumes of smoke from the Dixie Fire on a hill near them. An air tanker can also be seen flying near the smoke in the distance.


The Cal Fire Butte County unit captured an aerial view of the smoke plume from the Dixie Fire on July 29. Less than a week later, the fire would nearly double in size.

#DixieFire Today, we expect to see large plumes of smoke from the Dixie Fire as areas of unburned fuel from within containment lines continue to burn. Firefighters refer to these areas as “islands.” pic.twitter.com/m0xtroZgpg

Aerial view of a DC-10 aircraft dropping retardant to slow the spread of the Dixie Fire on Aug. 1.

This story will be continuously updated as more photos and videos are found. 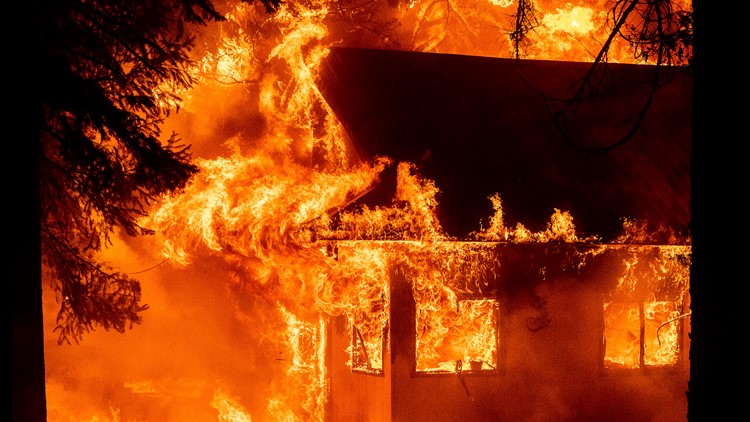