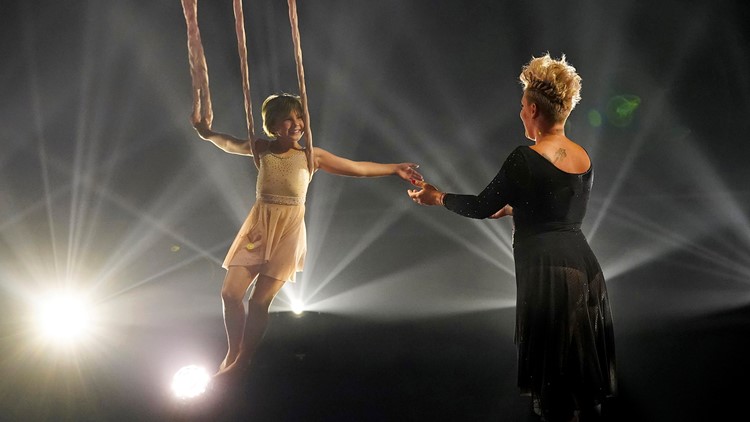 Pink and her daughter performed their duet ‘Cover Me In Sunshine’ while suspended from ropes.

Like mother, like daughter: Pop star Pink was joined onstage at the Billboard Music Awards by her 9-year-old daughter — showing off their powerful gymnastic skills as they spun in the air in a jaw-dropping performance.

Showing off her signature aerial and acrobatic moves, Pink was matched by Willow Sage Hart as “Cover Me In Sunshine” played in the background, Pink’s song featuring vocals from her daughter.

After embracing Willow, Pink stayed on stage to perform some of her hits including “So What” and “Just Give Me a Reason.”

The pre-taped performance aired during Sunday’s award show, where Pink earned the Icon Award, presented to her by Jon Bon Jovi.

“Willow, you nailed it,” Pink said after the performance. “I love what I do and I love the people that I get to do it with, and we’re pretty good at what we do, but it wouldn’t matter if no one came to see us and play with us. So all you guys out there … thank you for coming out!”

Pink humorously announced to Bon Jovi that he had broken her heart more than 30 years ago.

“I did not come out of my room for a week when you married Dorothea. I was eight. I ripped your poster off my wall. I replaced you with Sebastian Bach. And I’m very glad you found lasting love, Jon, but you broke my heart,” Pink said, jokingly. “I take this as an apology,” she added, looking at her ICON trophy.

Pink wrapped it up by giving her fans a piece of advice.

“Dream big, because what if it comes true?” she said.