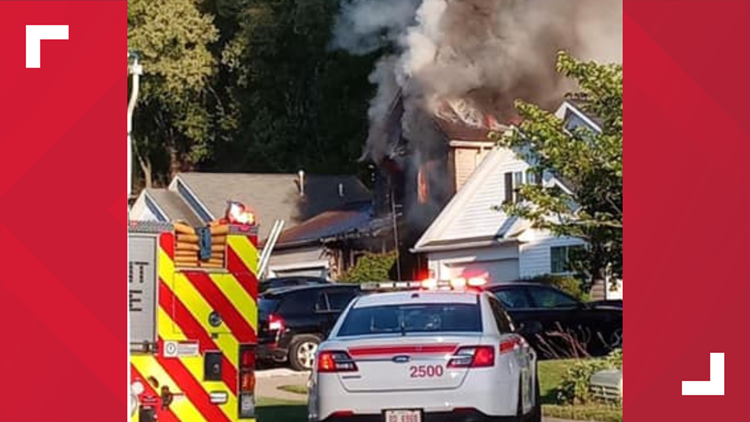 ‘There literally aren’t words to express my appreciation for these 2 heroes!!!’ the woman’s mother wrote on Facebook.

RAVENNA, Ohio — Family and loved ones are breathing a sigh of relief after police were able to rescue a woman from a burning home in the southern portion of Ravenna last week.

Officials confirm the incident took place this past Thursday, when they received multiple calls regarding a house fire on the 2000 block of Harvest Drive. Once on scene, crews found out the woman was trapped in the basement, which was filling up with smoke.

With the building “fully engulfed” in flames, officers were able to find a small basement window and told the woman to go towards it, doing so by yelling her name as she was not able to see through the smoke. Once she was close enough to the opening, the officers pulled her through and immediately took her to an ambulance.

The victim was treated for smoke inhalation, but neither she nor her boyfriend were seriously hurt (the house belonged to the boyfriend’s family). Sadly, however, two dogs perished in the blaze.

The mother of the woman later took to Facebook to express her gratitude for the first responders, and the police department later shared the post on its own page. The mother said her daughter suffered “a few burns and a lot of scratches and bruises” but was otherwise okay.

“Without [her] bravery, the help of the 911 dispatcher and the Ravenna police officer who pulled her out of the window my baby girl wouldn’t be here!” she wrote. “There literally aren’t words to express my appreciation for these 2 heroes!!! Thank you from the bottom of my heart!!!”

Investigators are still looking into what caused the fire.

MAFS Spin-Off Is A Dream Come True, Says Dr. Viviana Coles
The 10 Most Dangerous Enemies In The Series That Aren’t Bosses
Comment