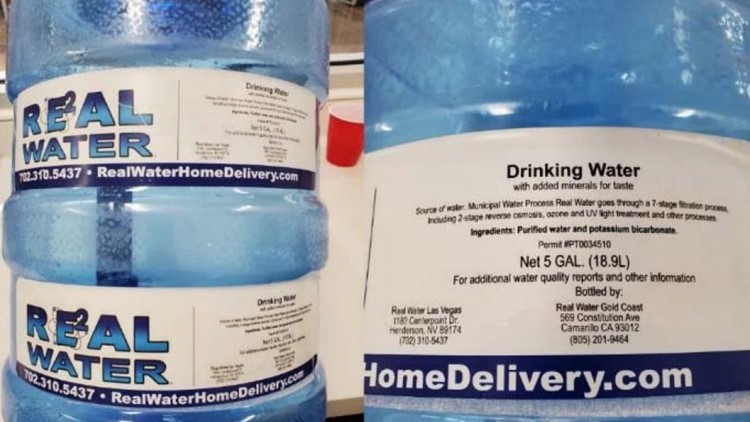 A federal complaint says Vegas-based brand’Real Water is drawn from the municipal water supply and treated with chemicals including caustic lye and a mineral salt.

Federal authorities have ordered a complete recall of a Las Vegas-based bottled water brand Real Water and ordered the company to surrender records in investigations of at least one death and multiple cases of liver illness among people who reported drinking it.

Brent Jones, company president, and attorneys for the company and the bottler, AffinityLifestyles.com Inc., did not immediately respond Friday to email messages about a U.S. District Court order issued Wednesday. The order stopped the production and distribution of the product marketed primarily in Nevada, Arizona, Utah and California.

The federal civil complaint refers to the product brand as “Re2al Water Drinking Water,” and says it is treated with chemicals including caustic lye and a mineral salt.

Water is drawn from the Las Vegas-area municipal supply, according to the complaint, filtered and processed with potassium hydroxide, or lye, the chemical potassium bicarbonate and magnesium chloride, a salt.

“Defendants claim to use a proprietary ‘ionizer’ apparatus to apply an electrical current to this mixture, which allegedly creates positively charged and negatively charged solutions,” the complaint says.

It says the negatively charged solution is marketed as “E2 Concentrate” taste-enhancer for coffee, tea and wine — and diluted in tanks and packaged for home delivery and commercial sales as “alkaline” Real Water.

The complaint alleges the “manufacture and distribution of adulterated and/or misbranded bottled drinking water and chemical concentrate” that “may have been rendered injurious to health.”

The consent decree requires the company to recall and destroy all the product produced before Wednesday; to turn over to the FDA records about processing, bottling and distribution; and to submit to unannounced inspections of company facilities in Las Vegas, suburban Henderson, Nevada, and Mesa, Arizona.

The company is committed to paying the cost of FDA activities at a rate of more than $100 per hour, and it must notify the agency before any change of ownership, reorganization or bankruptcy.

The Las Vegas-based Southern Nevada Health District on Thursday reported five more cases of liver illness believed to be linked to Real Water, including the death of a Clark County woman in her 60s who had underlying medical conditions. The report brought to 16 the number of acute non-viral hepatitis cases tied by the district to the product.

Several negligence and deceptive trade practices lawsuits in state court allege many more injuries. They accuse Jones, Real Water and Affinitylifestyles.com Inc. of causing a woman’s death, liver damage to children and internal organ damage to adults leading to hospitalizations and at least one liver transplant.

A case pending in U.S. District Court in Las Vegas seeks class-action status on the behalf of anyone injured in the U.S. after buying Real Water.

In court filings, the company acknowledges the FDA investigation but not that Real Water caused illnesses.

Jones, a former Nevada state Republican lawmaker, issued an apology in mid-March on the company’s drinkrealwater.com website and an assurance that “the lessons learned in this will drive further improvement in the brand.”

The FDA issued a statement in April calling it “crucial” for people not to “drink, cook with, sell or serve ‘Real Water’ alkaline water.”