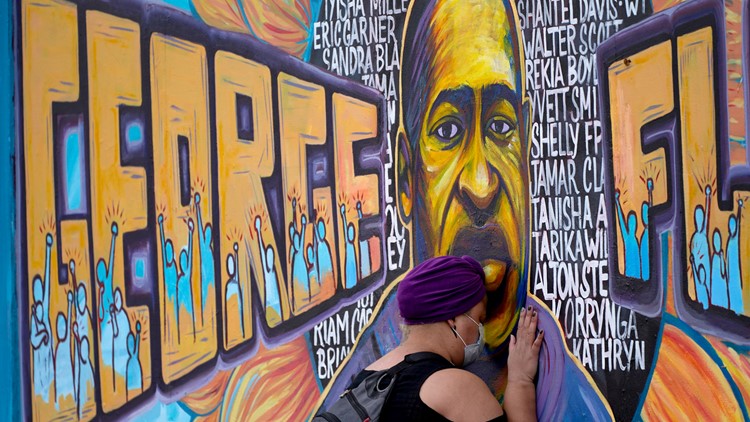 “I’m happy that the state of Minnesota convicted him (Derek Chauvin). I feel happy and relieved that at least this officer will go to jail.”

CLEVELAND — Vigils and remembrance ceremonies are taking place all across America on Tuesday to mark the one-year anniversary of the death of George Floyd at the hands of Minneapolis police officers.

Floyd, a black man handcuffed on the pavement, died after a white Minneapolis police officer named Derek Chauvin pinned a knee on his neck for more than nine minutes.

Floyd’s struggle to breathe — captured on a teenager’s cellphone – shocked America and fueled nationwide demonstrations. Some turned violent, including one five days later in Cleveland.

The death of Floyd and the resulting movement for social justice has not been lost on Samaria Rice, the mother of Cleveland’s Tamir Rice. Tamir was fatally shot by Cleveland Division of Police officer Timothy Loehmann in 2014.

Samaria Rice sat down for a one-on-one interview with 3News anchor and managing editor Russ Mitchell this week. She was asked for her reaction to the one-year anniversary of Floyd’s death.

“When I saw the video (of Floyd being choked), I almost fell out of my seat,” Rice recalls. “To see George Floyd and to see Derek Chauvin with a knee on his neck, his hands in his pocket, and that smirk on his face. I’m happy that the state of Minnesota convicted him. I feel happy and relieved that at least this officer will go to jail.”

In 2015, an Ohio grand jury declined to charge Loehmann. He was fired in 2016 after an investigation showed that he lied on his application to become a police officer. An appeals court upheld Loehmann’s firing. No member of the Cleveland Division of Police was ever charged as a result of Rice’s death.

With the assistance of the Cleveland Police Patrolman’s Association, Loehmann has filed an appeal with the Ohio Supreme Court to get his job back. On Monday, attorneys representing Samaria Rice and her family filed an amicus brief to try to stop Loehmann from being reinstated.

“I’m appalled. Even if it’s the union’s (CPPA) money, why would you keep wasting your money on this bad officer? I don’t think he should ever get a job in law enforcement again because he lied on his application,” Rice told Mitchell. “So how can you trust him?”

When asked what she would say to Loehmann if she could talk to him, Rice replied, “I would let him know his career is over in law enforcement and he should find something else to do.”

On Monday evening, Cleveland Police Patrolman’s Association attorney Henry Hilow responded to the brief filed by Rice’s attorneys. Hillow told 3News: “The issues raised in the amicus brief are not the issues being considered by the Supreme Court.”

Last month, U.S. Senator Sherrod Brown, and House members Tim Ryan, Joyce Beatty and Marcy Kaptur asked the U.S. Department of Justice to re-open the investigation into Tamir Rice’s death, which had been initially opened by the Justice Department under the Obama administration, but abruptly closed during the final weeks of the Trump administration.