WASHINGTON, D.C., USA — San Diego Padres manager Jayce Tingler shared emotional reactions Sunday after a baseball game Saturday night between the Padres and Washington Nationals was suspended in the sixth inning as the sounds of gunshots could be heard within the stadium. Three people were shot outside the Washington D.C. ballpark as players and fans took cover within the Padres dugout and at their seats.

The shooting happened at Saturday N Street and South Capitol Street SW, near the third-base gate of Nationals Park, according to police.

Social media showed fans fleeing the stadium while the announcer urged people to stay inside.

Tingler described hearing the sounds of gunshots calling it “a nightmare.” He said they worked to get the players off the field immediately.

Brushing away tears Tingler said his thoughts then turned to the players in the bullpen and the families in the stands.

According to multiple reports online, Padres players including Fernando Tatis Jr., Manny Machado and Wil Myers helped spectators into the dugout hoping to get them to safety. Tingler became visibly emotional while sharing what he observed.

The Padres manager described that amid the chaotic scene his players went to the stands to get their families and loved ones to safety and ended up bringing in fans as well.

“Seeing fans and seeing people in panic, they did the right thing… they thought maybe the dugout could have been the safest place. And they led and welcomed and guided people in there,” Tingler said. “Most people see them as baseball players, but when you get to see them as caring human beings, doing the right thing [as] loving husbands and sons and fathers – I’m honored to be a part of it.”

Tingler thanked the Nationals’ organization and security team for their swift actions calling the team’s manager Davey Martinez “a class act” noting that he reached out to Tingler Sunday morning. 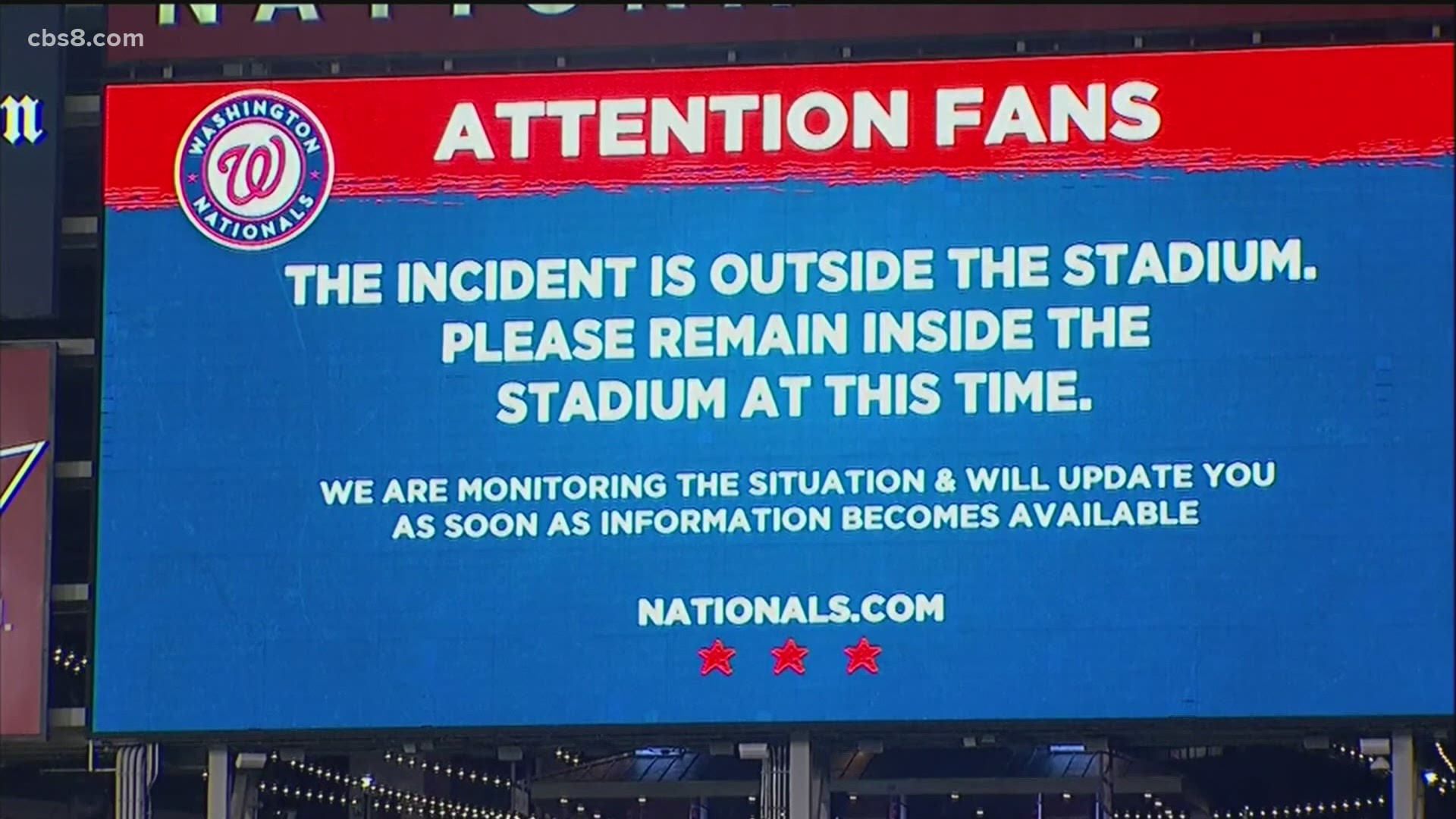 The Nationals ultimately issued a statement on their Twitter account, saying, “Fans are encouraged to exit the ballpark via the CF and RF gates at this time. We’re working with law enforcement to provide more information as soon as it becomes available.”

“In the midst of confusion & then some fear, my lasting image from tonight will be looking down on the field to see 22-year-old Fernando Tatis Jr. emerging from clubhouse and sprinting down the 3B line to grab his family & pull them to safety. I thought I admired the kid before,” Acee wrote on Facebook.

Just ended up in the Padres dugout bc of shooting. Thank you Manny Machado and @Padres pic.twitter.com/B2GaJ7Wt6V

San Diego resident Raul Villarreal told the San Diego Union-Tribune he was in Washington celebrating his bachelor party and took in the game.

“We were confused. We didn’t know if it was a shooting or a construction machine,” Villareal said. “The moment I understood that something wasn’t right was when I saw the players ran to the dugout. We were afraid that a stampede would breakout and then everybody started shouting, `Take cover, take cover, take cover.”‘

Gov. Gavin Newsom tweeted from the Office of the California Governor account: “Baseball games should always be safe spaces. Our thoughts are with California’s own @Padres and all those impacted by the shooting tonight.”

Baseball games should always be safe spaces. Our thoughts are with California’s own @Padres and all those impacted by the shooting tonight.

From his own Twitter account, Newsom said, “This is what ‘getting back to normal’ in America means after a pandemic.”

A primetime game in our Nation’s Capital has been brought to a halt by a shooting.

This is what “getting back to normal” in America means after a pandemic. https://t.co/yxmPcQIQ1V

Executive Assistant Chief of Metropolitan Police Ashan Benedict updated the number of victims at three to reporters Saturday evening. He said a woman was struck by gunfire outside the stadium and two people were shot inside a car, which police were processing. Those two victims were being questioned by police.

Shots were fired at the car from another vehicle, which was reported to have fled over the Frederick Douglass Memorial Bridge, Benedict said.

There was no immediate suspect information or vehicle description, nor a known motive.

The Padres led the game 8-4 when the shooting started. The Padres won by a final score of 10-4 after the game was resumed at 10:08 a.m. PT on Sunday. The teams also played their regularly scheduled game at 1:08 p.m. with the Nationals winning 8 -7.

Today I was able to ask @Padres pitcher @itsFatherJoe44 what it was like for the players on the field and in the dugout during last night’s scary shooting situation at Nationals Park @CBS8 @thecwsandiego #HungryForMore #PadresTwitter #NationalsPark #WashingtonNationals pic.twitter.com/qkgaTeQ5na

WATCH RELATED FROM WUSA: Fan describes chaos at Nats Park after a shooting happens outside the stadium during a game