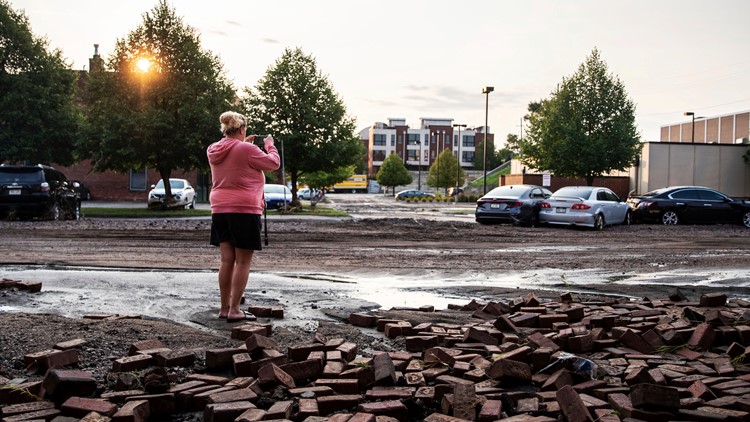 Nebraska’s largest city, Omaha, was under a severe thunderstorm warning Saturday night which produced flash flooding that stranded drivers and had people trapped in the city’s Old Market in downtown Omaha, the Omaha World-Herald reported.

Firefighters responded to calls of stranded drivers in 2 to 4 feet of flood water after an alert was issued after 9 p.m. local time Saturday by the University of Nebraska at Omaha.

As KETV reported, the National Weather Service counted six rescues of drivers stranded in flooded vehicles in Omaha. In the downtown area of the city, video shows flooding in and around multiple structures.

Local Omaha station KETV’s meteorologist Caitlin Harvey shared a harrowing witness video on Twitter where at least 3 individuals found themselves trapped in an elevator with murky water nearly up to their shoulders. One person could be heard pleading for help over their cell phone.

This flood footage from the Old Market in Omaha is insane. I’ve never seen anything like this firsthand. @ketv
Video credit: Tony Luu pic.twitter.com/sQGFcPjT0V

Bloomberg News reporter Jennifer Jacobs in Washington shared a version of the video as well on Twitter, noting that Omaha Firefighters were able to rescue the trapped people, according to Omaha Scanner

Nearly 1,600 people in areas in and around Omaha were without power Saturday night, according to Omaha Public Power District, as the storm brought in hail, wind and flooding.

Images of severe flooding were posted to social media like this video from Software Engineer Adam Lessek on Twitter, which was shared by the Omaha World-Herald. The video shows flood waters stranding cards in and around a parking deck in the city Saturday night.