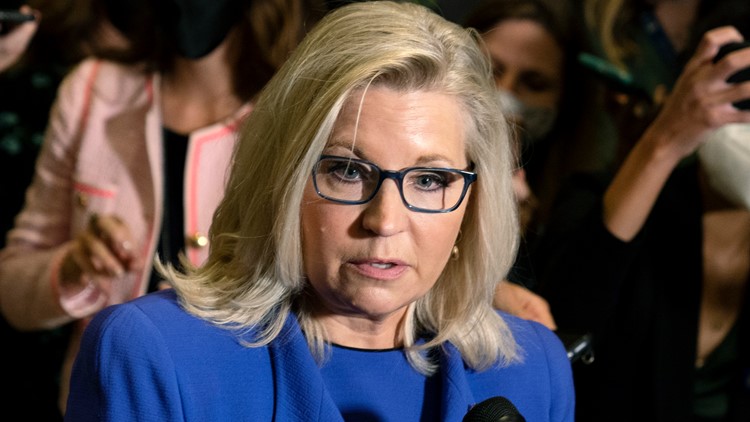 The GOP rush to punish Cheney for her criticism of Trump is drawing a cast of Wyoming primary challengers so big it could help her win.

WASHINGTON — For pro-Trump Republicans, removing Rep. Liz Cheney from House GOP leadership was relatively easy. Booting her from office will be another matter.

The rush to punish Cheney for her criticism of former President Donald Trump and his loyalists is drawing a cast of Wyoming primary challengers so big it could ultimately help her win again next year. Another boost for Cheney is a pile of campaign money and a family legacy that has helped her before.

During an interview with TODAY, which aired on Thursday, Cheney told Savannah Guthrie that she would do “whatever it takes” to keep former President Donald Trump from becoming president again.

When asked if she’d consider running for president herself, she said she is focused on “making sure that our party becomes again a party that stands for truth and stands for fundamental principles that are conservative and mostly stands for the Constitution, and I won’t let a former president or anybody else unravel the democracy.”

RELATED: ‘I will not sit back and watch in silence’: Liz Cheney says Trump, GOP backers threaten democracy

Still, there’s no doubt that her campaign to call out Trump’s lies about fraud in the 2020 election is firing up opposition — in the process revitalizing old complaints about a politician some see as more in touch with Washington insiders than Wyomingites.

Over a year remains before Wyoming’s deadline to file for the August 2022 Republican primary, but already at least six Republicans plan to run against her.

The growing scrum, ranging from a retired Army colonel to a rural kombucha brewer, is on the minds of Cheney allies and opponents alike.

“There’s going to be an awful lot of them. It’s probably going to split the vote,” observed Mark Falk, a Cheyenne resident planning to vote against Cheney.

Trump has promised to endorse a Cheney challenger, but the window of opportunity for Cheney’s opponents to do much else to narrow the field may have closed. A bill, backed by Trump’s son Donald Trump Jr. to institute primary runoffs, failed in the Wyoming Legislature in March amid concerns about costs and making big changes to the election system on short notice.

Cheney, meanwhile, has proved she can rebound from ignominy to prevail in a crowded field of Republicans — it’s how she first got elected. After ditching an ill-received run for Senate in 2014, she came back to run for the House in 2016, winning almost twice as many votes as the runner-up in a nine-way primary.

She’s since knocked off little-known Republican and Democratic opponents alike with ease, all while building up a formidable fundraising operation. From January through March, she brought in $1.5 million — her best quarter yet.

Her national profile as a daughter of former Vice President Dick Cheney doesn’t hurt. And she could even get a boost from her status as Democrats’ new favorite Republican. Wyoming allows voters to register at the polls, and its Democrats often switch affiliation to vote in a hotly contested Republican primary.

To be sure, discontent with Cheney in Wyoming has grown wider and deeper since she voted to impeach Trump for his role in the Jan. 6 riot at the U.S. Capitol. Even after she survived her House Republican colleagues’ first attempt to oust her from leadership on Feb. 3, she was censured in an overwhelming vote by the state GOP central committee.

“I’ve never been a Cheney fan,” said one primary opponent, Marissa Joy Selvig, a former mayor of Pavillion, population 200. “She has been working more for herself and for the Republican Party than she has the citizens of Wyoming. That’s what I see.”

A farmer’s market kombucha brewer who accompanies student and church musicians on harp, piano, flute and other instruments, Selvig said she planned to run for Congress even before Cheney’s recent troubles.

Selvig pledged to serve in Congress with a “sense of peacefulness” and willingness to “work together for the good of the nation.”

Others running include state Sen. Anthony Bouchard, a gun rights activist and co-owner of a Cheyenne-area septic system business; state Rep. Chuck Gray, a conservative radio commentator whose father owns Casper-area radio stations; and retired Army Col. Denton Knapp of Trabuco Canyon, California, who graduated from high school in Wyoming in 1983 and plans to move back.

Trump and his allies have yet to hint at whom, if anybody, among Cheney’s opponents they prefer, even though doing so could discourage yet more candidates from entering the fray.

Cheney’s predicament with Trump has meanwhile breathed new life into old gripes, including that she spent little time in Wyoming before moving to wealthy Jackson Hole in 2012.

Labeled a “carpetbagger,” Cheney struggled through a six-month run against popular Sen. Mike Enzi, a fellow Republican, before dropping out in early 2014.

She regrouped, traveling the state and building an organization that helped her dominate a nine-way Republican primary for an open U.S. House seat in 2016. She beat a little-known Democrat with 62% of the vote and has won reelection by even wider margins since.

Yet to this day, Cheney has never quite proved herself for some Wyomingites who wonder why she voted to impeach when she and Trump both won the state in 2020 with almost 70% of the vote.

“I think she’s gotten way too far away from Wyoming, is just more of a Washington insider than anything,” Falk said. “I always kind of never thought she was a real Wyoming representative.”

Trump wasn’t popular in Wyoming at first, either. But that has changed.

In 2016, caucusing Republicans gave Texas Sen. Ted Cruz 23 delegates and just one each to Trump and Florida Sen. Marco Rubio. That October, with Cheney closing in on winning the House seat Republican Rep. Cynthia Lummis was vacating, Lummis said she would vote for Trump while “holding my nose.”

Lately though, Lummis, elected last year to the Senate to replace the retiring Enzi, has been conspicuously quiet about Cheney. Just as Cheney was being voted out of House leadership, Lummis tweeted about transportation infrastructure and has kept silent about her close colleague’s fate.

“Nobody is standing with Liz,” lamented Republican state Rep. Landon Brown of Cheyenne, one of the very few Wyoming elected officials to take to social media in Cheney’s defense. “They’re all afraid to take on the Republican Party and stand up for what’s right.”

Another Cheyenne resident, though, said that while he understood Cheney’s interest in upholding the Constitution, impeaching Trump over the riot wasn’t a straightforward proposition.

“Let’s be honest, the attack on Congress was terrible. Whether or not you hold him responsible for that, I don’t know that that’s completely fair to say that he was personally responsible, although he didn’t do much to relieve it,” said George Geyer, a retired teacher and coach.

Cheney hasn’t done a terrible job, Geyer added, but he will probably consider voting for somebody else.