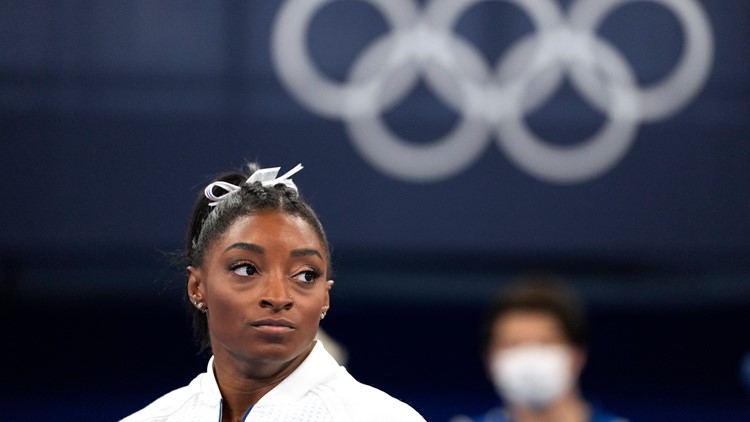 No decision has been made on if she will compete in the Tokyo Olympics individual balance beam.

At this time, no decision has been made on whether or not she will compete in the balance beam finals.

“Simone has withdrawn from the event final for floor and will make a decision on beam later this week,” USA Gymnastics tweeted Saturday night. “Either way, we’re all behind you, Simone.”

Biles has been dominant on floor exercise during her elite career, winning five world championships along with her triumph in Rio. Her innovative tumbling has redefined what is possible on the podium. She has two tumbling pass dismounts named after her in the sport’s Code of Points.

Simone has withdrawn from the event final for floor and will make a decision on beam later this week. Either way, we’re all behind you, Simone.

Jennifer Gadirova of Britain will replace Biles in the finals, which are scheduled for Monday.

On Friday, Biles decided she would not defend her Olympic vault title, pulling out of Sunday’s event finals for both vault and uneven bars while she focuses on her mental health.

The 24-year-old six-time Olympic medalist removed herself from competition during the team finals on Tuesday and sat out Thursday’s all-around final as well. Biles said on social media Friday that she is dealing with what is defined as “the twisties”: the sudden inability to feel comfortable while twisting in midair.

Biles said she’s battled the issue before, but typically only when it comes to vault and floor exercise. This time around, it’s a problem on all four apparatuses.

USA Gymnastics said Biles will continue to be evaluated daily to determine her potential readiness for future competitions.