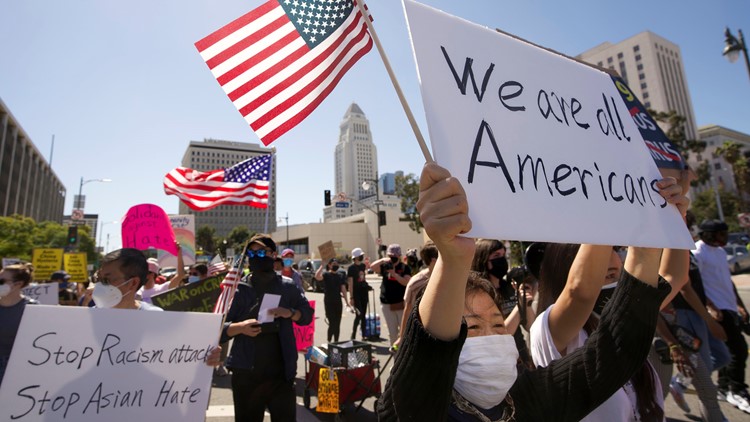 Asian Americans have used the pandemic-fueled hate to spread more awareness around hate crimes and they say more action is needed.

It started in metro Atlanta.

A white gunman was charged with killing eight people in three separate spas. Six of the victims were Asian women. Prosecutors are now seeking the death penalty against Robert Aaron Long, the suspect in the deadly shootings in March.

The string of gun violence occurred in metro Atlanta, but it sparked a movement across the United States. Communities came together to hold memorials, rallies and vigils to remember the lives lost and to fight against a spike in Asian hate crimes.

“It was really disorientating when it all happened, but we knew we needed to start working right away,” said Arah Kang, a board member of the nonprofit organization Korean American Coalition-Metro Atlanta.

Physical and verbal attacks against Asian Americans have grown significantly in the past year due to the false belief that Asian people are to blame for the spread of the coronavirus. Anti-Asian hate incident reports nearly doubled in March, according to the organization Stop AAPI Hate. Former President Donald Trump even referred to COVID-19 as the “China virus” or the “Kung flu.”

Those harmful words have incited fear among Asian American communities, but amid all the devastation and trauma, Asian Americans have used the pandemic-fueled hate to spread more awareness around hate crimes. Asian American and Pacific Islander organizations have also been hard at work to support communities impacted by the violence.

Kang said almost immediately after the news of the Atlanta-area shootings, she was involved in organizing a local vigil. She said what she didn’t expect was the overwhelming response to it.

“We went from a local vigil, and then it became a nationwide vigil, and within a matter of days, it turned into a global vigil,” she said.

Kang said the experience made her realize how much more work there was left to be done.

“We wanted to be more proactive. We wanted to make a statement about combating Asian hate crimes,” Kang said. “For me, it was hard for me to wrap my head around the question, ‘Why did it take a mass shooting for the Asian American community to be taken seriously?’”

There’s also been growing movement on the national level. Last month, the Senate overwhelmingly passed the COVID-19 Hate Crimes Act, which would establish a process for hate crimes against Asian Americans to be investigated and documented by state and federal law enforcement officials.

“Passing this bill makes it very clear that hate and discrimination against any group has no place in America,” said Senate Majority Leader and New York Democrat Chuck Schumer. “Bigotry against one is bigotry against all.”

Still, Asian Americans say they want to see more change. That includes advocating for more education around experiences of all minority groups.

“We really have to be open about learning and unlearning because white supremacy has seeded into our community and other Black, Indigenous, People of Color communities. The learning has to be continuous. There’s no pinnacle,” Kang said.

Change doesn’t always have to be big. It can start small – with daily actions. According to Stop AAPI Hate, that includes making donations to groups actively fighting anti-AAPI discrimination. People can also support local Asian or businesses.

Most of all, change starts with recognizing the good that’s happening in AAPI communities.

“We don’t want to be just defined by our trauma,” Kang said. “We also want to celebrate Asian joy.”

Lorraine Is Attacked By A Demon
Mass Effect: Legendary Edition – Everything that Carries Over in Each Game
Comment