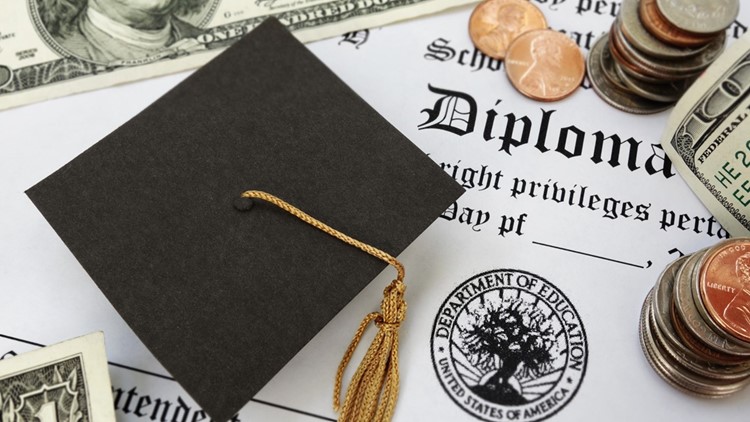 The U.S. Department of Education said this will be the “final extension” of the freeze on student loan payments prompted by the COVID-19 pandemic.

WASHINGTON — Editor’s note: The attached video is from before the latest extension was announced.

The Biden Administration announced Friday that the pause on federal student loan payments would be extended through January 2022. The announcement comes just a few weeks before the freeze was set to expire at the beginning of October.

Student loan payments were put on pause with the CARES Act back in March 2020, at the outset of the coronavirus pandemic in the U.S. The forbearance was originally set to expire nearly a year ago, in Sept. 2020, according to CNBC, but has been extended three times since then. Friday’s announcement, according to the U.S. Department of Education will be the “final extension.”

Borrowers will not have to make payments on federal student loans during the moratorium, interest rates will be set at 0% and debt collection efforts will remain on pause. The suspension will expire on Jan. 31, 2022.

“The payment pause has been a lifeline that allowed millions of Americans to focus on their families, health, and finances instead of student loans during the national emergency,” U.S. Secretary of Education Miguel Cardona said in a press release. “As our nation’s economy continues to recover from a deep hole, this final extension will give students and borrowers the time they need to plan for restart and ensure a smooth pathway back to repayment. It is the Department’s priority to support students and borrowers during this transition and ensure they have the resources they need to access affordable, high quality higher education.”

The department says it will start notifying borrowers of the extension over the next few days, and plans to release resources and other information to help people plan to pay their loans back, when the bills finally do come due at the end of January 2022.

As the July job report indicates, the U.S. economy may be rebounding, but there have been concerns that borrowers would not be ready to continue payments so soon. Democrats, including Senate Majority Leader Chuck Schumer, N.Y., and Sen. Elizabeth Warren, Mass., recently pressed Biden to extend the moratorium through at least March 2022.

“The payment pause has saved the average borrower hundreds of dollars per month, allowing them to invest in their futures and support their families’ needs,” the Democrats said.

The extension drew criticism from conservatives including Rep. Virginia Foxx, the top Republican on the House Education and Labor Committee.

“I regret that Secretary Cardona did not show real leadership by working with Congress to transition responsibly the portfolio back into repayment by Oct. 1 of this year,” Foxx said in a statement. “It is nothing less than a dereliction of duty.”