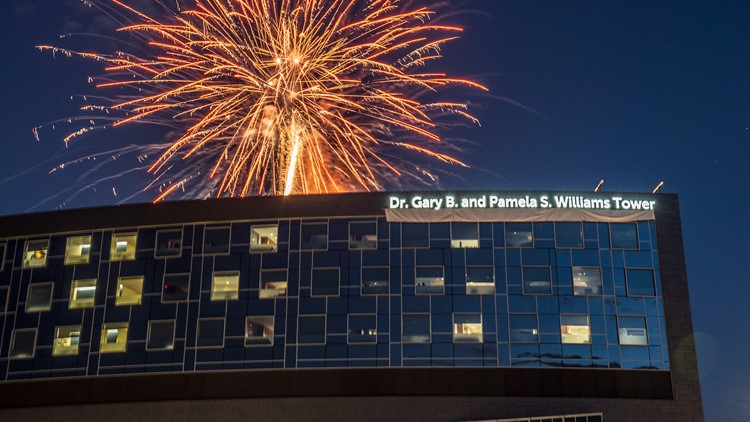 The money came from former hospital surgeon Dr. Gary Williams and his wife Pamela, both well-known philanthropists and educators in the community.

AKRON, Ohio — Summa Health on Thursday announced it has received the largest donation in its history: $15 million from Dr. Gary B. Williams and his wife Pamela S.

The couple are both well-known educators and philanthropists in the community, and in recognition of their efforts the hospital system renamed its patient tower on the University of Akron campus in their honor. The pair were also presented with the Boniface DeRoo Award, Summa’s highest honor for charitable giving.

“This truly meaningful and transformational gesture will have a positive impact on the health and wellbeing of the greater Akron community for years to come,” Dr. Cliff Deveny, president and CEO of Summa Health, said. “We are proud to recognize Dr. and Mrs. Williams’ generosity with naming our patient tower, the front door of the Akron Campus, in their honor. There, their name will forever shine in the Akron skyline as a testament to their legacy of caring for our community as the most generous benefactors in the history of Summa Health.”

Opened in 2019, the seven-story Williams Tower sports 17 labor and deliver rooms, 22 beds for neonatal intensive care, 67 rooms for same-day surgery, 108 private patient rooms, and 11 modern surgical suites. In addition, the breast health center on the ground floor is already named for the Williamses, in recognition of a previous $5 million in 2017.

Dr. Williams worked as a surgeon at Summa for more than four decades (eventually serving as chief of the general surgery division) and also had stints as both an associate professor Northeast Ohio Medical University and a surgery at the Ohio State University. Mrs. Williams has dedicated her life to charitable causes and is currently a member of the University of Akron Foundation’s board of directors, and has also served as a teacher at various schools in the Akron area.

“Pam and I are honored to support the organization that has made a difference in the lives of so many individuals over the years,” Dr. Williams stated. “We hope that our gift reaffirms the commitment that Summa has to providing the highest quality, compassionate care for the entire Akron region.”