San Diego Lifeguards performed seven water rescues and one cliffside rescue while the remaining survivors of the overturned boat swam to shore.

SAN DIEGO COUNTY, Calif. — Four people died and 26 others were injured Sunday after a suspected smuggling boat overturned off Point Loma near Cabrillo National Monument, according to the San Diego Fire-Rescue Department and Customs and Border Patrol officials. SDFRD described the boat as a 40-foot cabin cruiser.

Emergency crews from multiple agencies responded to the scene near 200 Catalina Blvd. which was first reported around just before 10 a.m., according to SDFRD.

San Diego Lifeguard officials said the initial call came in as a report of a vessel adrift with one person on board. As lifeguards arrived on scene the boat had crashed into the shoreline, broken apart and 30 people were in the water.

“Our goal was just to rescue everyone we can from the water and along the beach and get them safely transported to the hospital as quickly as we can,” said San Diego Lifeguard Lt. Rick Romero.

Romero described conditions during the rescues as rough with five to six feet of surf, wind gusts and water temperatures around 60 degrees 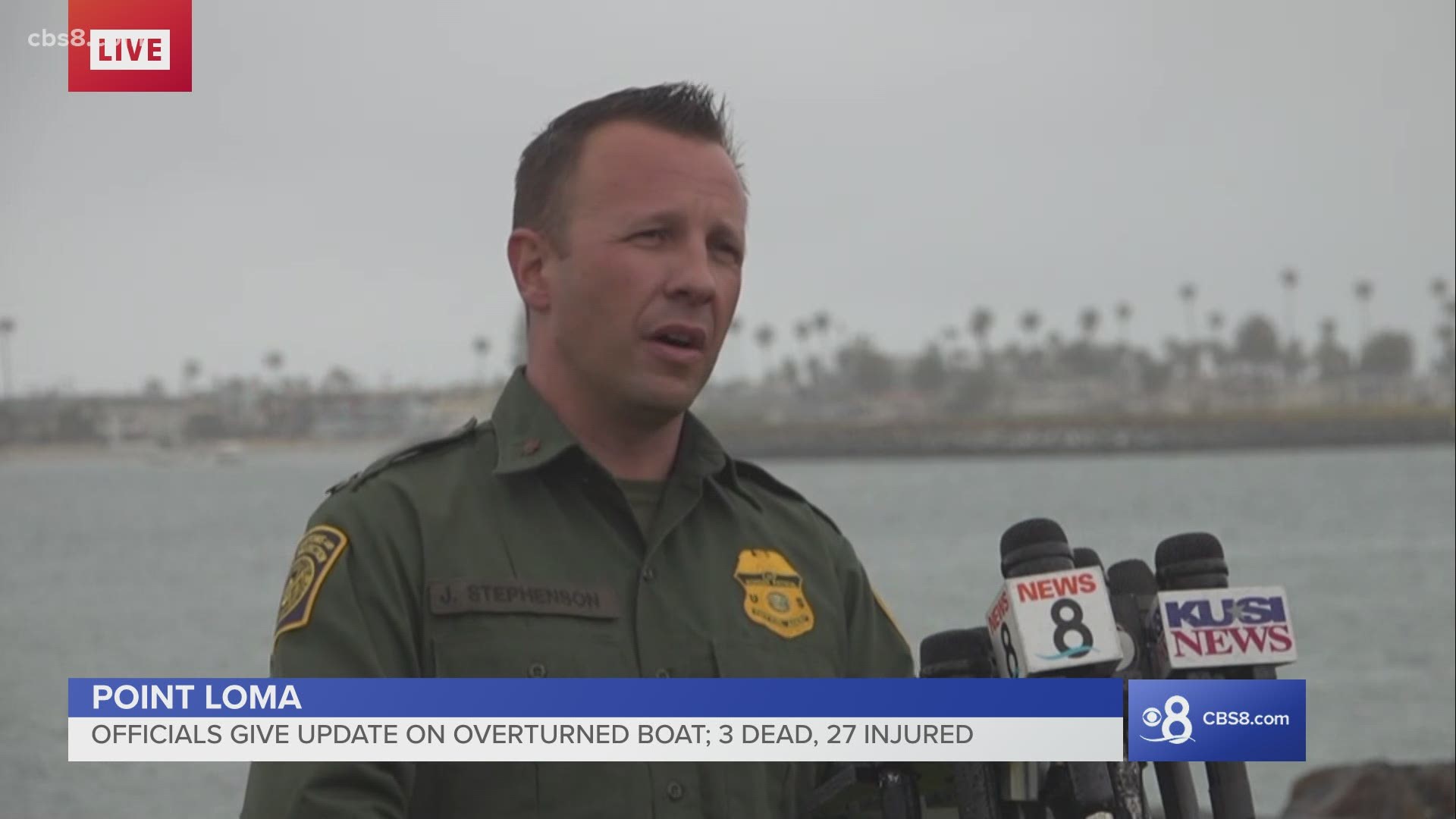 Jeffery Stephenson of the Customs and Border Protection Public Affairs Office said the agency had every indication that the boat was a smuggling vessel being used to bring people into the United States illegally.

He described the boat as “severely overcrowded.”

According to San Diego Lifeguard officials, lifeguards pulled seven of the 30 people from the water and performed one cliffside rescue while the other surviving occupants from the boat swam to shore on their own. At least three did not survive.

“This was a mass rescue operation that turned into a mass casualty event,” Gartland said. There was one major trauma and three people were treated with CPR, San Diego Lifeguard Chief James Gartland said.

The suspected smuggler was among those transported and was being questioned by Border Patrol officers, Stephenson said.

Lifeguard officials said there was a wide range of injuries and ailments being treated including hypothermia.

“It’s a tragedy,” said Gartland. “It’s a tragic event here in San Diego. Probably one of the bigger vessel accidents, bigger calls that we’ve seen here certainly in my 26 years and certainly in Lt. Romero’s 28 years – this is probably the worst tragedy.”

As of Sunday afternoon, U.S. Coast Guard personnel continued to search the water off Point Loma for additional victims.

SDFRD firefighters and lifeguards, along with federal firefighters, U.S. Coast Guard and other local agencies worked together on the accident.

About 96 personnel were assigned to the rescue, including medics, fire engine crews and a chaplain.

The Mexican Consulate also released a statement via Twitter saying they are aware of this incident and are prepared to assist any possible victims.

Photos taken at the scene of the boat incident today. 40’ cabin cruiser broke up along the rocks inside the surf line. The @SDLifeguards cliff rescue veh was used to extricate one patient up to street level. pic.twitter.com/lQ54UdBWBG

Multiple agencies including @SDLifeguards rescued 25 people from the water. Sadly, two did not survive. 23 were taken to local hospitals. Federal agencies are still searching the water in vessels and aircraft.