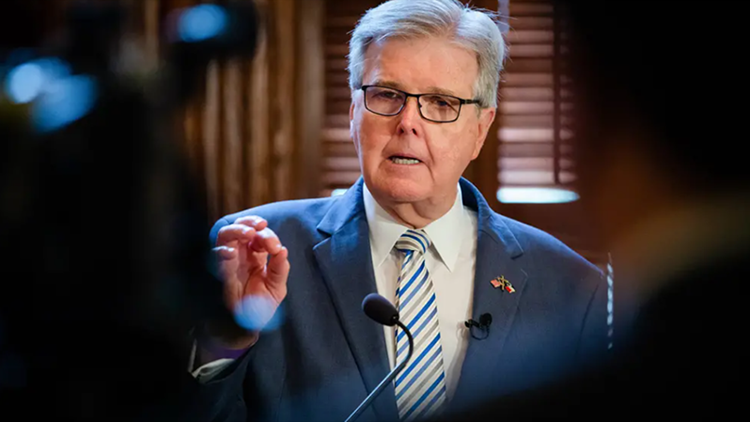 “Not surprisingly, Democrat social media trolls were up late misstating the facts and fanning the flames of their lies,” Patrick in response to the backlash.

During an interview Thursday night on Fox News, Patrick was asked about the COVID-19 crisis in Texas.

“The Democrats like to blame Republicans on that. Well, the biggest groups in most states are African Americans who are not vaccinated. Last time I checked, over 90 percent of them vote for Democrats in the major cities and major counties,” Patrick told host Laura Ingraham.

In Texas, the vaccination rate among Black people is low compared to other racial and ethnic groups with 29% vaccinated.

But in terms of raw numbers, the biggest group of the unvaccinated is white people, the Texas Tribune reports.

There are an estimated 5.6 million white people who are eligible and unvaccinated, while the same figure is 1.9 million for Black people, who make up a far smaller part of the overall population, according to the Tribune.

The figure is 4.9 million for Hispanic people, whose population is now nearly as large as the non-Hispanic white population in Texas.

Patrick said Democrats are to blame for the low vaccination rate in the Black community.

“In terms of criticizing Republicans for this, we’re encouraging people who want to take it to take it – but they’re doing nothing for the African-American community who has a significant higher number of unvaccinated people,” Patrick said.

He stressed that he respects the rights of people who don’t want to get vaccinated, touting the GOP stance that vaccines and masks are “individual rights.”

“So it’s up to the Democrats, just like it’s up to the Republicans, to try and get as many people vaccinated – but we respect the fact that if people don’t want the vaccination, we’re not gonna force it on them, that’s their individual right.”

“Keep the race element out,” he told KHOU 11 reporter Marcelino Benito. “At one point it was the immigrants, now it’s African Americans, who will be next?

“This virus has no respect of persons. It doesn’t  care about your religion who you look like or what your status is,” Turner said.

“Keep the race element out. At one point it was the immigrants, now it’s African Americans, who will be next?”

More of our interview on #khou11 at 5 pic.twitter.com/TJVuVFnWTz

Patrick’s comments also sparked immediate outrage from within the Senate that he oversees.

Sen. Borris Miles, a Black Democrat from Houston, released a statement Friday morning saying that “for the second time in the past month, Lt. Governor Dan Patrick has made prejudiced, inflammatory statements about African Americans and that is unacceptable.”

Patrick’s Democratic challenger for reelection, Mike Collier, also responded to the Fox News interview, saying in a statement that Patrick is “blaming Black Texans for low vaccination rates to distract from his own failures.”

Patrick responded to the critics with his own tweet Friday afternoon, accusing Democrats of “playing politics with peoples’ lives.”

“Not surprisingly, Democrat social media trolls were up late misstating the facts and fanning the flames of their lies,” he posted in a statement. “Federal and state data clearly indicate that Black vaccination significantly lower than White or Hispanic.” Read his full statement here.

Despite Patrick’s claims, vaccine hesitancy is higher among Republicans than it is among Black people in Texas, according to a June poll from the Texas Tribune and the University of Texas at Austin. Thirty-eight percent of Republicans said they would not get a vaccine as soon as it is available to them, while 18% of Black people said the same.

Texas has reported race and ethnicity data for about 82% of people who are fully vaccinated, according to the Tribune.

They analyzed the demographic and geographic trends of Texans who have not gotten their shot yet. Here are some of our main findings:

In Texas’ largest counties — Harris, Dallas, Tarrant, Bexar and Travis — neighborhoods with the highest proportions of Black and Hispanic populations are some of the least vaccinated areas.

According to the latest numbers from the state health department, 66 percent of Texans – or 15.9 million people – have had a least one COVID shot. About 13.2 million are fully vaccinated, leaving some 9 million unvaccinated.

The Texas Tribune reports preliminary data from the state indicates that more than 99.5% of people who died due to COVID-19 in Texas from Feb. 8 to July 14 were unvaccinated. The percentage of fully vaccinated residents has gone from 3% to 42% in that time span.