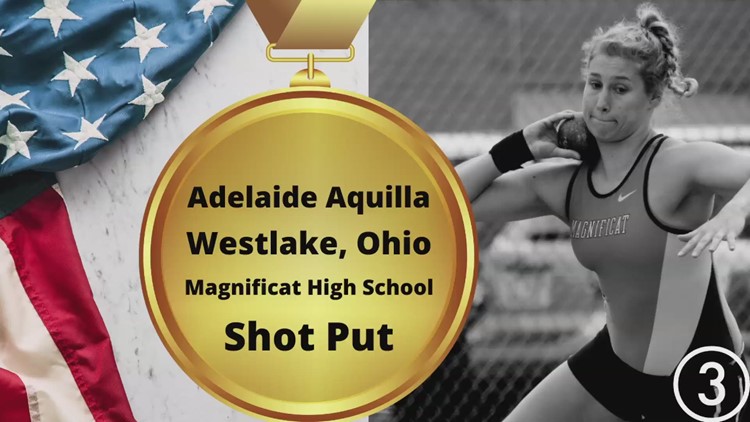 “I’m so grateful to be competing for Team USA and just representing Ohio, northeast Ohio and everybody in the country,” says Adelaide.

Twenty-two-year-old Aquilla’s Olympic journey began way back when she was a young kid, with of all things, a sweatshirt.

“We used to have this thing where if you did every single event on the track, you’d get a sweatshirt,” says Aquilla. “It was my weekend for shotput, to test it out and hopefully get my sweatshirt, and I guess I was pretty good for an elementary kid.”

While she never did get that sweatshirt, she found something better.

Aquilla says, “I really started taking it seriously and liking the sport.”

She discovered a love, drive, and passion for a sport that would take her places she never imagined. However, her first stop was Magnificat High School in Rocky River, Ohio.

“Day in and day out, Adelaide was just working on her craft,” says Moira Clark, the President of Magnificat High School.

Magnificat track coach, Scott Troyan says, “You’d see her all the time in high school, she’d win but say, ‘I didn’t throw that good.’ It was never good enough; she always has to get better. That was always her mentality.”

As Adelaide continued throwing further and further, she and her parents sought out permanent coaches and found the next stop on her journey was T3 Performance in Avon, Ohio.

“She was very intense, very focused, detail-oriented,” says James Dibiasio, Strength and Conditioning Coach at T3 Performance. “You knew within one session that this girl was strong.”

“She’s so strong,” says Bob D’andrea, Throwing Coach at T3 Performance. “Such a strong will. Even when she had a bad day, she had a good day. She learned from it and her work ethic was off the map.”

RELATED: ‘OK not to be OK’: Mental health takes top role at Olympics

After a record-setting high school career, Adelaide walked on at Ohio State University and took her throwing to new distances.

“She could have been a competitor anywhere, but here she’s at the pinnacle of what you want to be, a female athlete of the year at Ohio State,” says Tracy Aquilla, Adelaide’s mother. “That’s what she reached for.”

Her distances and reaching helped to punch her ticket, by way of Westlake, Bay Village, Rocky River, Avon, and Columbus, to Tokyo.

“There’s nobody who deserves it more, all the work that she’s put in,” says Adelaide’s brother, Jonas Aquilla.

“She’s a great role model,” says Ambrose Aquilla, Adelaide’s youngest brother. “Seeing her progress throughout her college career, from being a walk-on to an Olympian shows how strong she is.”

Adelaide says, “I’m so grateful to be competing for Team USA and just representing Ohio, Northeast Ohio, and everybody in the country.”

Her first event in Tokyo is the shotput qualifying round which begins Friday, July 30. Adelaide is scheduled to throw at 6:25 a.m.

Editor’s note: The video in the player above is from a story published on July 14, 2021.