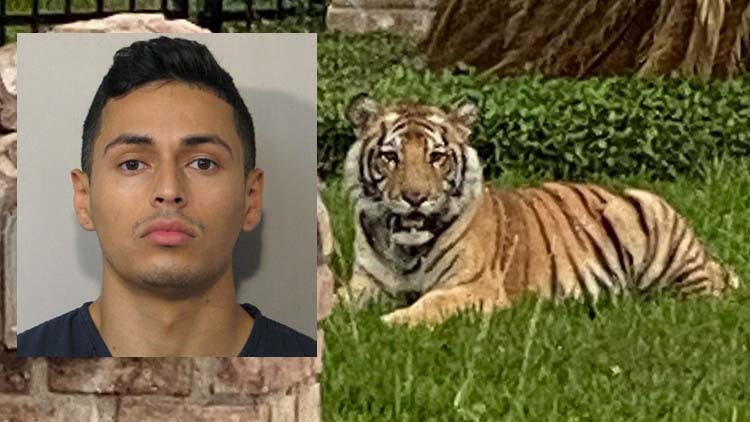 Police say 28-year-old Victor Hugo Cuevas took off with the Bengal tiger in a white Jeep Cherokee with paper plates.

HOUSTON — Houston police are still looking for the man who escaped with his pet tiger late Sunday, and now they know why he probably took off.

Victor Hugo Cuevas is out on bond for a November 2020 murder in Fort Bend County, according to HPD Commander Borza.

Before police arrived to question him, they say Cuevas loaded the Bengal tiger in a white Jeep Cherokee and took off. There was a brief chase, but they lost him.

He now faces an evading arrest charge and his bond on the murder charge will be revoked, Borza said. They hope to get the tiger back before it’s harmed.

“It’s not the animal’s fault, it’s the breeder’s fault. It’s unacceptable. It shouldn’t be happening at all,” Borza said.

A neighbor who says he was the first to spot a tiger walking around a Houston neighborhood has shared new video of the bizarre scene with KHOU 11.


Jose Ramos said the big cat was walking and lying in the grass across the street from his West Houston home on Ivy Wall Drive. It was just after 8 p.m., and he immediately alerted his neighbors through an online posting and then called 911 for help.

Ramos said police dispatchers actually asked him who they should send to help.

“It was very scary because this is a very family-oriented community, and you see lots of kids and baby strolling,” Ramos told KHOU 11’s Michelle Choi. “And people taking their pets, dogs and walking them. So again, the first thing I was thought was to alert the community so everybody would stay home.”

An off-duty Waller County sheriff’s deputy was nearby and saw the online posting and came to the street.

The deputy pulled out a gun as it crossed the roadway toward him. That’s when another neighbor came outside and yelled at the deputy, “don’t shoot him! Don’t shoot him!”

“Last thing I wanted to do was shoot the tiger. It didn’t seem super aggressive,” Deputy Wes Manion said.

He told the man to take the tiger inside. A short time later, neighbors said they saw the man putting the tiger in his SUV and taking off before police showed up.

Not the only exotic animal?

Neighbors told reporter Michelle Choi they thought they once saw a chimpanzee or monkey in a window at the home, but they never knew a tiger was there.

This is Jose Ramos — he’s the neighbor who FIRST spotted the tiger across the street from his house in a yard — called 911, snapped a pic of the big cat CAREFULLY, and then alerted his neighbors by posting on neighborhood blog. @KHOU #Htownrush pic.twitter.com/ewMHQ0A2qs

One neighbor said they thought the tiger was part of an elaborate Mother’s Day prank. Others said they were scared because a child’s birthday party was taking place down the street.

The homeowner said the man had rented the house since November and he had no idea he was keeping a tiger there.

Also watch: First report of a tiger on the loose in a Houston neighborhood


He said they didn’t report any animals and didn’t pay a pet deposit.

The man said he was a little suspicious because he wasn’t allowed to go inside the home to do repairs.

Not the first time

Residents are not allowed to keep tigers as pets in the City of Houston, although permits can be provided for owners in the unincorporated portions of Harris County and other parts of Texas.

This is the second time in the last couple years there’s been a tiger sighting in Houston. Back in February of 2019, a tiger was found in an abandoned home in southeast Houston and eventually moved to an undisclosed sanctuary in Texas.