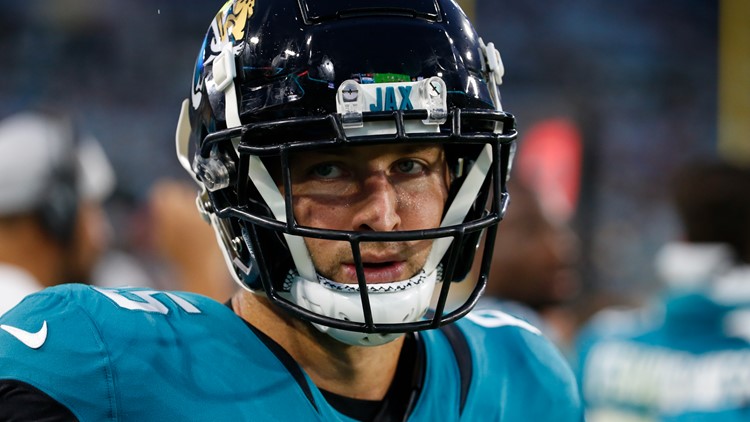 “Thankful for the highs and even the lows, the opportunities, and the setbacks,” said Tim Tebow on Twitter.

JACKSONVILLE, Fla. — The Jaguars and Tim Tebow have parted ways, according to a release sent from the team Tuesday.

Tebow posted a statement on Twitter Monday to express gratitude for his involvement with the Jacksonville Jaguars.

“Thankful for the highs and even the lows, the opportunities, and the setbacks. I’ve never wanted to make decisions out of fear of failure and I’m grateful for the chance to have pursued a dream…

Thank you to the @Jaguars organization and everyone who has supported me in this journey.  And we know that…God works all things together for good. Romans 8:28″

Tebow stepped onto the Jags’ practice field sporting a teal No. 85 practice jersey back in May, hours after the news broke that the Jaguars had officially signed him as a tight end.

Tebow has a long history with the Jags’ new head coach, Urban Meyer, leading the Gators to the 2006 and 2008 BCS National Championships under Meyer’s guidance.

At this time, it’s not clear why Tebow and the Jaguars seem to have parted ways.

Tebow lives in Jacksonville with his wife, Demi-Leigh, where the two are actively involved in the community and the Tim Tebow Foundation’s Night to Shine event, an annual party for people with special needs. He is also a part-owner of the Jacksonville Icemen.