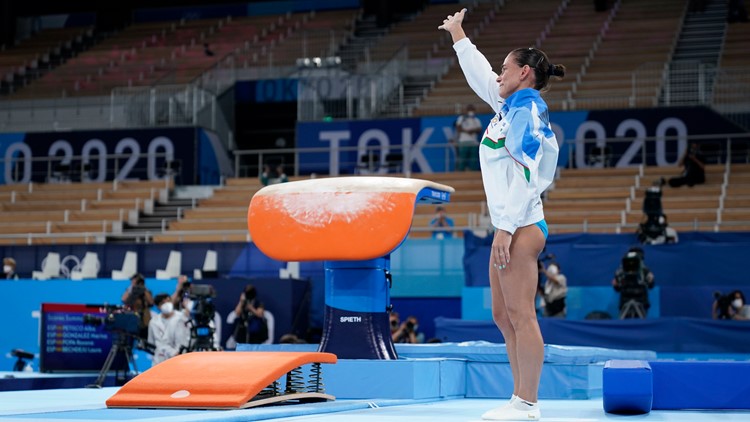 The 46-year-old from Uzbekistan did not qualify for the gymnastics final at her record eighth Olympics.

The 46-year-old from Uzbekistan did not qualify during the vault final at her record eighth Olympics.

Athletes, judges and administrators rose to their feet to salute Chusovitina as she made her way off the floor. She waved to the crowd with tears in her eyes before posing for pictures with whoever wanted one.

“I’m saying goodbye to sports,” Chusovitina said. “It’s kind of mixed feelings. I’m alive, I’m happy, I’m here without any injuries, and I can stand on my own.”

Chusovitina has won a pair of Olympic medals during her long career.

At 46 years old, she competed for one last time and received a standing ovation from her competitors. #TokyoOlympics pic.twitter.com/qJgPTWICAD

She was part of the Russian Federation team that captured gold in 1992. She later added a silver medal on vault while competing for Germany in 2008.

She credits gymnastics for helping save Alisher’s life as a child. Alisher was diagnosed with leukemia when he was 3. Chusovitina moved to Germany to give him access to treatment and used the living she made there as a gymnast to help pay for his care.

RELATED: Which US gymnasts were victims of the 2-per-country rule?

RELATED: Why the US sent 6 women gymnasts to the Olympics, not 5

RELATED: How a team of refugee athletes made it to Tokyo Olympics