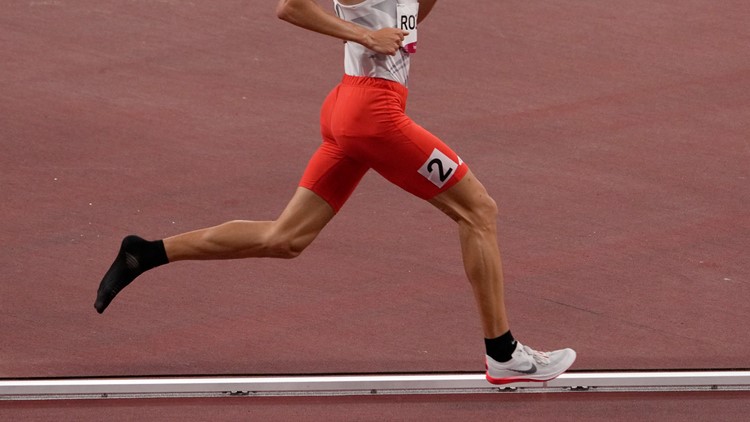 WASHINGTON — Poland’s Michal Rozmys wasn’t going to let a missing shoe stop him from crossing the finish line at the Tokyo Olympics on Thursday.

During the men’s second 1,500-meter semifinal, Rozmys lost his right shoe. It slowed him down, but didn’t stop him. He finished the race in 13th place, with a total time of 3 minutes and 54.53 seconds.

At this time, it’s not known how he lost the shoe in the first place.

The 26-year-old is currently ranked 38th in the world in the men’s 1,500-meter, according to World Athletics. He also runs the men’s 800-meter, but not on the Olympic stage.

During the same semifinal heat, Abel Kipsang from Kenya won and broke an Olympic record with a final time of 3 minutes 31.65 seconds.

The finals for the event will be held on Saturday.

Several days before the race, Rozmys posted on Facebook saying “Your great support is always very much needed for us athletes. Keep your fingers crossed and cheer.”

Kenya’s Abel Kipsang breaks the OLYMPIC RECORD in the men’s 1500m during the second semifinals! 🤯 #TokyoOlympics

Dutch runner Sifan Hassan had a hiccup during the women’s 1,500-meter heat, but still came back and won. At the start of the final lap, she tripped and fell after Kenya’s Edinah Jebitok tumbled in front of her. Hassan got back to her feet and finished in 4 minutes, 5.17 seconds to qualify for the semifinals.