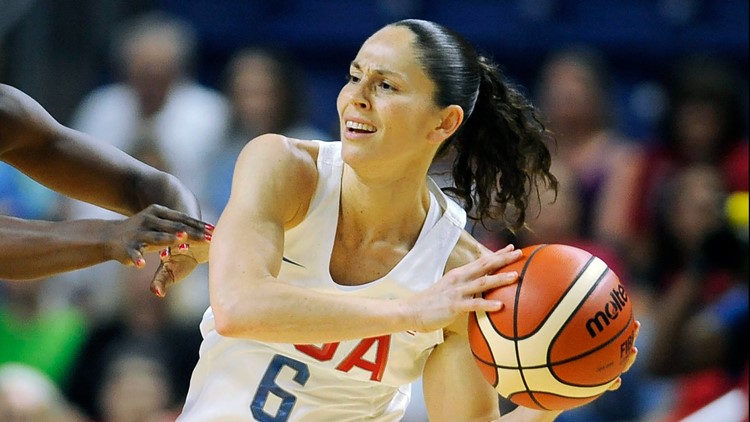 Alvarez and Bird were picked by a vote of fellow Team USA athletes and are the first duo to share the honor of leading the U.S. athletes into the Opening Ceremony.

WASHINGTON — Women’s basketball player Sue Bird and Marlin’s baseball player Eddy Alvarez have been selected to be the flag bearers for the United States during the Opening Ceremony of the Tokyo Olympics.

“An honor unlike any other,” Team USA tweeted with the news Wednesday morning.

Alvarez and Bird were selected through a vote of fellow Team USA athletes and are the first duo to share the honor of leading the athletes into the Opening Ceremony, according to Team USA.

The International Olympic Committee (IOC) changed its guidelines this year to emphasize gender equality at the Tokyo Olympics by allowing for there to be one male and one female athlete jointly carrying each nations’ flags at the Opening Ceremony.

“With 49 percent female participation, Tokyo 2020 will be the first gender-equal Olympic Games ever,” the IOC said. “For the first time, there will be at least one female and one male athlete in each of the teams participating in the Games.”

An honor unlike any other.@eddyalvarez90 and @S10Bird have been selected as #TeamUSA’s flag bearers for the #TokyoOlympics Opening Ceremony. 🇺🇸 pic.twitter.com/w7VFMYANft

Sue Bird, a five-time Olympian and four-time Olympic medalist, is one of 11 players to have earned an Olympic gold medal, FIBA World Cup gold medal, WNBA title and NCAA title.

Bird is the first basketball player to be named flag bearer since 2004, when Dawn Staley, the 2020 U.S. Olympic Women’s Basketball Team coach, held the honor.

“It’s an incredible honor to be selected the flag bearer for Team USA,” said Bird in a statement. ” It’s an honor that is bigger than the moment in that you’ve been selected by your fellow Team USA athletes to represent the entire delegation, and it will last forever.”

Eddy Alvarez, a member of the U.S. Olympic Baseball Team, is also an Olympic medalist. He competed in the Sochi 2014 Winter Games and won a silver medal as part of the 5,000-meter four-man short-track speedskating team.

“It is an honor and a privilege to be named as one of the flag bearers by my fellow Team USA athletes for the Opening Ceremony,” said Alvarez in a statement. “Being a first-generation Cuban-American, my story represents the American Dream. My family has sacrificed so much for me to have the opportunity to wave this flag proudly. I am grateful for my time with US Speedskating and USA Baseball, as well as for all of my teammates, and I am humbled to lead Team USA into the Tokyo Olympic Games.”

After being postponed a year due to the coronavirus pandemic, the Tokyo Olympics will finally take place July 23 through August 8.

The Opening Ceremony is the first prominent celebration of the competition, but this year it will likely look and sound slightly different without fans. The order of nations has also been changed slightly, so you may need to wait a bit longer than normal for Team USA’s appearance.

Tokyo has issued an emergency order that lasts beyond the game, barring any fans — even athletes’ families — from attending. A reduced number of Olympic officials and VIPs, including first lady Jill Biden, will be in attendance.

The Opening Ceremony will still include performances, pageantry and the Parade of Nations.

For Tokyo, the order of when athletes parade behind their nation’s flag-bearers will be slightly different this year, according to NBC Sports.

The International Olympic Committee says tradition dictates that the parade is in alphabetical order, according to the language of the host country, with the exception of Greece leading the parade and the host country bringing up the rear. Kyodo News in Japan reported in October that the Tokyo Games organizing committee will determine the marching order based on the Japanese-language names and Japan’s “fifty-sound” phonetic order.

NBC Sports reported that Greece, which traditionally marches first, will be followed by the Refugee Olympic Team. When the Refugee Team was first introduced in the 2016 Rio Olympics, they marched second to last. So, following the Refugee Team, all nations will follow in alphabetical order, with a few other key exceptions.

When does Team USA march during the Opening Ceremony?

Also new this year, future Olympic host nations will march at the end of the parade right before the host country.

So, the United States will be the third to last country in the Tokyo Olympics Parade of Nations, according to NBC Sports, because the 2028 Summer Games will be held in Los Angeles.

France, which is hosting the 2024 Olympics, will be second to last, just before host nation Japan.

What will the flag bearers wear?

The Team USA flag bearers in steamy Tokyo will likely be the coolest members of their packs.

Ralph Lauren has built a personal air conditioning system into a roomy white jacket to be worn by the yet-unannounced athletes who will have that honor during opening ceremonies for the Olympics and Paralympics, the company said Wednesday.

The technology disperses heat from the wearer’s skin through a fan device at the back of the neck, with a lightweight personal battery controller stashed inside. It’s akin to how large computers are kept cool.

“The more we can think about our personal space and personal thermal dynamics, that’s the future that we’re all going to have to think about,” said David Lauren, Ralph Lauren’s son, vice chairman of the company’s board, and chief branding and innovation officer.

The rest of the team will walk in tailored navy blazers made of U.S.-grown wool, a red Olympic patch on one breast and the company’s Polo Pony emblem on the other.