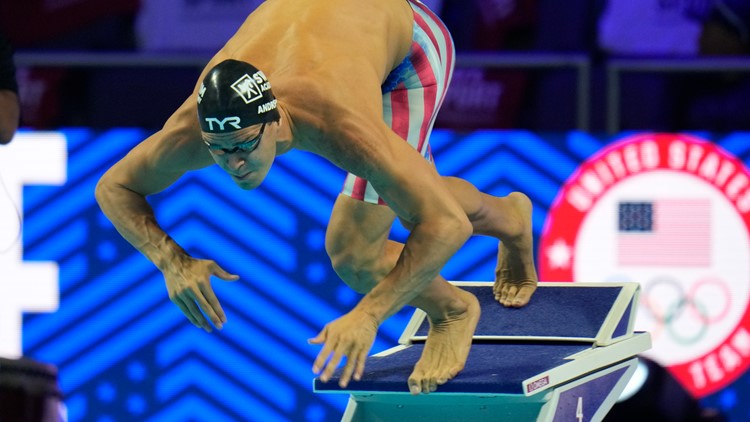 Tokyo Olympic organizers and the International Olympic Committee didn’t make it mandatory for athletes to be vaccinated to compete.

TOKYO, Japan — A debate is brewing between former gold medalist Maya DiRado and some American swimmers over U.S. medal threat Michael Andrew’s decision not to be vaccinated against the COVID-19 virus as he prepares to compete at the Tokyo Olympics.

DiRado sparked the discourse this week with a lengthy thread on Twitter in which she wrote that she’s “disappointed” in Andrew’s decision to compete unvaccinated and his reasoning behind it.

Andrew revealed earlier this month that he isn’t vaccinated after being asked about his status by a reporter.

“My reason behind it is, for one, it was kind of a last moment, I didn’t want to put anything in my body that I didn’t know how I would potentially react to,” he said.

“As an athlete on the elite level, everything we do is very calculated and understood. For me, in the training cycle, especially leading up to trials, I didn’t want to risk any days out. There were periods where you take a vaccine, you have to deal with some days off.”

As a former member of Team USA, I’m disappointed in @SwimmerMichael ‘s decision to attend the Olympics unvaccinated and his reasoning behind it. Please allow me to explain [1/8]

Andrew said he has no plans to be vaccinated in the future.

“We feel very safe and protected knowing that we’re minimizing risk as much as possible,” he said, citing daily testing during the Olympics.

Tokyo Olympic organizers and the International Olympic Committee didn’t make it mandatory for athletes to be vaccinated to compete. Just over 20% of the Japanese population is fully vaccinated. The IOC has reported 13 positive cases among all athletes in Japan.

RELATED: At least 100 US athletes unvaccinated as Olympics begin

About 100 of the 613 U.S. athletes in Tokyo are unvaccinated, the U.S. Olympic and Paralympic Committee’s medical chief said Friday. Andrew is the only member of the U.S. swim team to publicly reveal that he is not vaccinated.

“That Michael would make a decision that puts even a bit of risk on his teammates for his own perceived well-being frustrates me,” DiRado wrote. She is one of three athlete representatives on USA Swimming’s board of directors, having retired after the 2016 Rio Games, where she won four medals, including two golds.

The top Americans — Caeleb Dressel, Katie Ledecky, Lilly King and Simone Manuel — have all said they are fully vaccinated.

Former gold medalist Anthony Ervin tweeted to DiRado that Andrew had COVID-19 in December, “and thus has a natural immunity.”

“What part of that responsibility involves shaming one of our Olympian’s (sic) on the eve of competition?” Shields tweeted.

Andrew dominated at the U.S. trials last month with impressive times in qualifying for the 100-meter breaststroke, 200 individual medley and 50 freestyle to earn his first Olympic berth.

The 22-year-old swimmer who lives in Encinitas, California, first created waves in the sport when he turned pro at age 14. He is trained by his father, Peter, using a non-traditional method known as Ultra Short Race Pace Training. It involves only swimming at your goal race pace or faster in practice. It eliminates drills, kicking or any technique-based work. His mother, Tina, is his agent.

“We chose a path. We’ve prided ourselves on that,” Andrew said. “It is cool to finally be at this point and for people to see that all those years of hard work and the fact that we can do it differently makes sense.”

The online back-and-forth was surprising, as the American swimmers typically present a positive and united front at the Games while emphasizing team success over individual accomplishment.

“Michael is allowed to make his own decisions and I can guarantee you that none of us here are holding any decision like that against him,” teammate Patrick Callan tweeted. “He is still doing everything in the best interest of this team.”