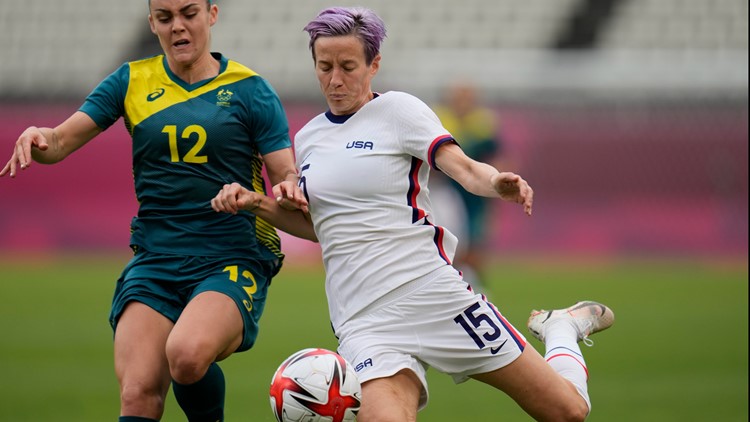 The Americans are looking to win a fifth Olympic gold medal in Tokyo.

KASHIMA, SAGA, Saga — The United States made it through to the quarterfinals of the women’s Olympic soccer competition after a 0-0 draw with Australia on Tuesday before a group of Japanese schoolchildren.

The Americans are looking to win a fifth Olympic gold medal in Tokyo. They are also vying to become the first team to win at the Olympics following a World Cup title.

But they’ve made it hard on themselves at the Tokyo Games. The U.S. team lost to Sweden 3-0 in its opening match — snapping a 44-game unbeaten streak — before rebounding with a 6-1 victory over New Zealand.

The draw with Australia secured the United States second place in Group G behind Sweden on goal difference. The Americans will face the winner of Group F — either the Netherlands or Brazil, depending on late results — in Yokohama on Friday.

The United States made five lineup changes for the match, which was not unexpected given the tight competition schedule. Alex Morgan was back up front, in place of Carli Lloyd, while Megan Rapinoe replaced Tobin Heath. Captain Becky Sauerbrunn and defender Kelley O’Hara also returned to the starting lineup.

Morgan broke away early in the game but her hard shot was stopped by Australia goalkeeper Teagan Micah.

Hard fought but @USWNT and Australia end it in a draw #TokyoOlympics pic.twitter.com/7yrpWZPfId

Morgan’s header in the 30th minute was disallowed for offside, a call that was confirmed by video review. The United States also had four goals called back for offside in the first half of the victory over New Zealand.

Overall, the Americans again looked out of sorts. Australia controlled possession for much of the game. On Megan Rapinoe’s free kick in the 57th, O’Hara’s pass missed and Morgan’s shot went over the goal, but again the Americans were offside.

Australia made a late change to its starting lineup, replacing Caitlin Foord with Mary Fowler.

Children from schools around Kashima, a coastal town of about 67,000, attended the match, some carrying signs. When Rapinoe was taken off in the second half, they politely applauded as she passed by.

The Matildas were also likely to advance as the third-place finisher in the group, but they have to wait until the end of play on Tuesday to determine their spot.

With 12 teams competing in the tournament, the top two finishers in each of the three groups advance to the knockout stage, along with the top two third-place finishers.