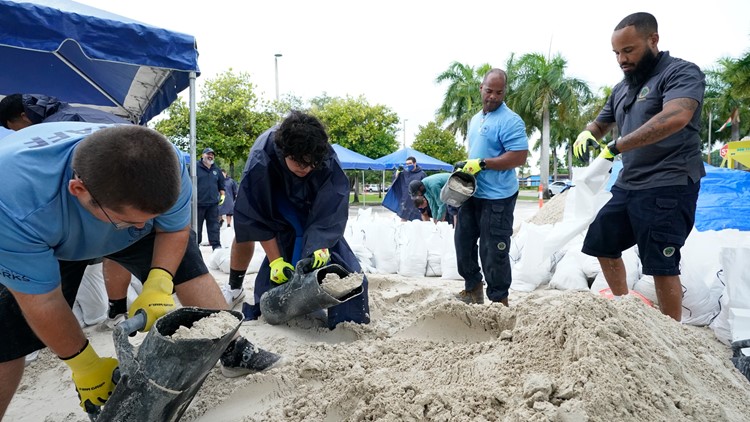 FORT LAUDERDALE, Fla — Three tropical systems were churning early Monday in the Atlantic basin and threatening to impact the U.S. Gulf Coast, some Caribbean islands including earthquake-damaged Haiti, and the island territory of Bermuda.

Tropical Storm Fred was located in the Gulf of Mexico and could make landfall by Monday evening along the Florida Panhandle, the U.S. National Hurricane Center said. A tropical storm warning and a storm surge warning were in effect for coastal areas.

Fred had maximum sustained winds of 50 mph (85 kph) and was located 175 miles (285 kilometers) south of Panama City, Florida. It was traveling north-northwest at 6 mph (10 kph). Forecasters said the system could slightly strengthen before landfall.

RELATED: Fred strengthens slightly as it heads to US coast

The main threats from Fred were rainfall — anywhere from 4 to 8 inches (10 to 20 centimeters) for Florida’s Big Bend and Panhandle — and storm surge. High water between 3 to 5 feet (1 to 1.5 meters) could enter the area between Indian Pass and the Steinhatchee River, depending on the tide at the time of Fred’s arrival.

Tropical depression Grace was dropping rain over Puerto Rico early Monday and forecast to move over Hispaniola later in the day. The hurricane center said forecasted rainfall between 4 and 8 inches could cause flooding and possible mudslides for Haiti and the Dominican Republic through Tuesday.

Haiti was already dealing with the effects of a 7.2 magnitude earthquake, which struck Saturday and was blamed for nearly 1,300 deaths.

RELATED: Death toll of powerful earthquake in Haiti soars to 1,297

Grace was centered 200 miles (320 kilometers) east-southeast of Port-au-Prince, Haiti, and moving west at 15 mph (24 kph). Top winds were around 35 mph (55 kph), with little change in strength forecast during the next few days.

Tropical depression eight formed late Sunday near Bermuda, and the hurricane center predicted it would become a tropical storm sometime Monday. A tropical storm watch is in effect for the island.

The system had maximum sustained winds around 35 mph (55 kph). It was located about 135 miles (220 kilometers) east-northeast of Bermuda and expected to make a “slow clockwise turn toward the west” over the next few days, forecasters said in an advisory. The center of the depression was forecast to move east and south of the island territory.