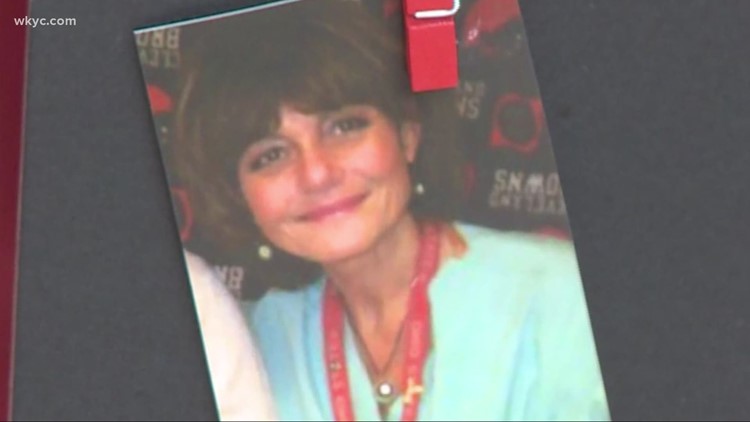 As state investigators step in to help with three Cleveland cold cases, 3News exclusively followed one family’s journey to meet with investigators for the first time within the unsolved murder of Aliza Sherman.

The family’s search for answers:
‘I don’t want her to be defined by how she died’


Jennifer Sherman has spent every day of eight years and four months fighting for justice.

Speaking up for her mother, Aliza, praying that soon the murderer who stabbed the Cleveland Clinic nurse in March 2013 would be held accountable.

“We’re just really grateful for this chance of a fresh set of eyes on the case,” she said.

This week, 3News’ Sara Shookman traveled with Jennifer Sherman to the BCI’s London, Ohio, headquarters where Jennifer met with investigators for the first time.

“I feel like this was important to be here, to stand here on behalf of my mom…and say, ‘We’re here. We’re not going away.’ … I often stand here and try to be my mother’s voice and humanize her because, one, I don’t want her to be defined by how she died,” Jennifer said. “But also because there are many people out there that don’t know her that didn’t know her before she was killed. And she was so incredible that she deserves for people to know who she was.”

Sherman walked into the London offices on August 2 for the meeting where she saw Rolos candy on the table. Her mom’s favorite.

“Even though my mother’s not here with me physically, she is 100 percent with me,” Jennifer said. “I’m someone who’s very intuitive. I’m like, let me see how I feel when I got there. Like, am I going to feel her energy? What kind of vibe am I going to get? And I walk in and on the table…There’s nothing more blatant than letting me know you’re here then putting Rolos in front of my face because she absolutely loved them. It was amazing.”

She added that this team is taking the case personally.

“They are invested. And to me, what more could a victim’s loved one, want to hear than that?” said Sherman. “[Aliza] is looked at as a human being and a mother and a daughter and a, and a nurse and, you know, not just another case number.”

Roger Davis, the special agent supervisor for the BCI Cold Case Unit, said they all look at it from that perspective.

“If this was my mother or this was my family member or anybody else close to me, is everything being done that can to help bring closure to this case?”

Davis tells 3News they will “try anything possible” to solve the case.

“We’re going to look at what all has been done for each and every piece of either surveillance or evidence,” Davis said. “Where do we move forward? What else can we do? Or are there other things that we can look at? Are there other people that haven’t been talked to?”

Davis says BCI will conduct interviews, re-examine physical evidence and boxes of documents related to the file. After organizing what exists and digitizing the case file, the organized material will be shared with every member of the multidisciplinary team.

“We’ll go through 45 to 50 questions that are from all three disciplines, the laboratory, criminal intelligence and investigations,” Davis said, with all parties meeting in a roundtable to flesh out new investigative leads.

“In a case like the Sherman case, there is extensive amount of documentation and case review, so that there’ll be many hours of assessment review and investigative processes with the case,” he said.

3News asked investigators, how will this case get solved?

“My colleague, who’s part of this team, always likens it to a jigsaw puzzle,” Davis said. “We want to continue to find the pieces and put them together. And even if we don’t find that piece in the next, you know, year or two years, can we have it in a place where in five years that missing piece comes in?”

Sherman said she’s hoping the person responsible knows it’s only a matter of time before “they’ll be held accountable for what they did.”

Editor’s note: Video in the player above was originally published on June 17, 2021.


Aliza Sherman was murdered on March 24, 2013 outside the 55 Erieview Plaza building as she walked to her divorce attorney’s office.

As Sherman walked toward Gregory Moore’s Stafford & Stafford office, she was stabbed 11 times, once in her right arm, twice in the right side of her neck and eight times in the back.

An employee upstairs inside heard her screams and ran outside to call 911.

The 53-year-old was a fertility nurse at the Cleveland Clinic, and a mother of four. She was in the middle of a contested divorce from Sanford Sherman. The proceedings were due to begin in court in two days.

Persons of interest:
What we know

Dr. Sanford Sherman was Aliza’s estranged husband. Proceedings related to their contested divorce were due to begin two days after her death. Aliza had filed for divorce in 2011.

E-mails filed with the court as part of a civil lawsuit against Dr. Sherman spell out Aliza feared for her safety as the divorce case moved forward.


Aliza Sherman’s divorce attorney Gregory Moore provided false information to law enforcement regarding his whereabouts on March 24, 2013, the day Sherman was murdered in downtown Cleveland. Moore had been scheduled for a meeting with Sherman that afternoon.

Moore sent texts to Sherman claiming he was in his office, but prosecutors say phone and key card records proved otherwise.

Editor’s note: Video in the player above was originally published on March 22, 2019.

In 2016, he was indicted on charges of tampering with evidence, misleading Sherman and purposely lying to police. Moore later pleaded guilty to one count of falsification for giving investigators inaccurate information on the day of the murder.

In 2017, Moore also pleaded guilty to falsification and inducing panic charges in a separate case for making a trio of phone calls claiming there was a bomb inside the Cuyahoga County Old Courthouse. He also called bomb threats in to the Geauga and Lake county courthouses in 2012.


The only publicly released evidence is a surveillance video Cleveland Police released in April 2013. The grainy video shows a masked figure in black running from the crime scene. No suspect has ever been named.

You can see a portion of the surveillance video in the player below. Note, this video was originally published on March 22, 2019:

What’s next?:
How you can help


Ohio BCI could not provide a timeframe for next steps. They are compiling the case file in its entirety before they begin the review process.

There’s an outstanding $100,000 reward for information that leads to an arrest in the case. It continues to be the largest reward in Cuyahoga County history.

The Justice for Aliza campaign has been dedicated to honoring Sherman and fighting for justice, holding annual vigils to keep her memory alive. Jennifer maintains an active Facebook page with updates.