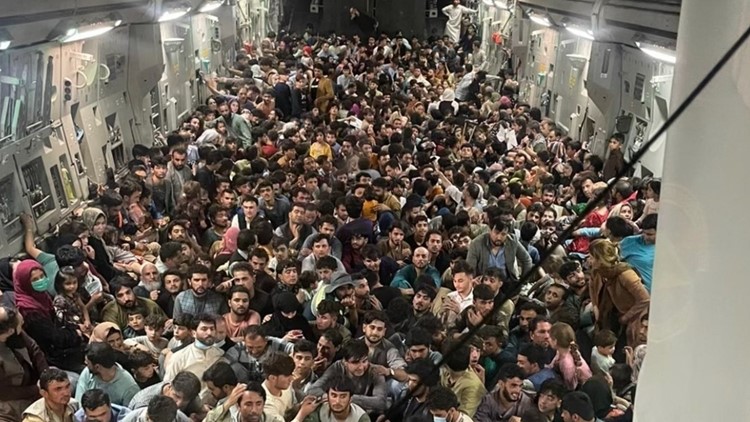 In audio posted online, a flight controller was clearly surprised when the C-17 pilot told them how many people they believed they had on board.

WASHINGTON — During the rush to evacuate people from Afghanistan, one U.S. military cargo plane safely transported around 640 Afghan citizens out of the country on Sunday, according to the U.S. Air Force.

A photo provided by the U.S. Air Force showed the C-17 packed with hundreds of men, women and children trying to escape Afghanistan after the Taliban’s swift takeover of Kabul.

Defense One, which was first to report on the remarkable scene, cited a defense official who said the flight, operating as Reach 871, was not meant to take so many people but Afghan citizens who had been cleared to evacuate had pulled themselves onto the plane as its ramp was closing.

The official told the outlet that instead of trying to force people off, “the crew made the decision to go” and took off for Al Udeid Air Base in Qatar.

News of the packed plane began to spread in the United States late Sunday after audio was posted online that appeared to be the C-17 pilot telling a shocked flight controller they believed they had about 800 people on board.

“Ok, how many people do you think are on your jet? 800 people on your jet? Holy cow… Good job getting off the ground,” a noticeably shocked flight controller can be heard saying in the recording.

In total, around 640 Afghan citizens got off the plane when it landed, Defense One reported and the U.S. Air Force later said. The C-17 seen in the photo is typically designed to carry 102 paratroopers and their gear, but can hold up to 171,000 pounds of cargo, according to the U.S. Air Force.

On Monday, thousands of Afghans rushed the tarmac at Kabul’s airport, desperate to escape the Taliban’s takeover. At least seven people died in the chaos, including two who clung to the wheels of a C-17 and fell to the ground as it flew away, and two others shot by U.S. forces.

The White House said Tuesday that more than 700 people were evacuated Monday, including 150 American citizens.