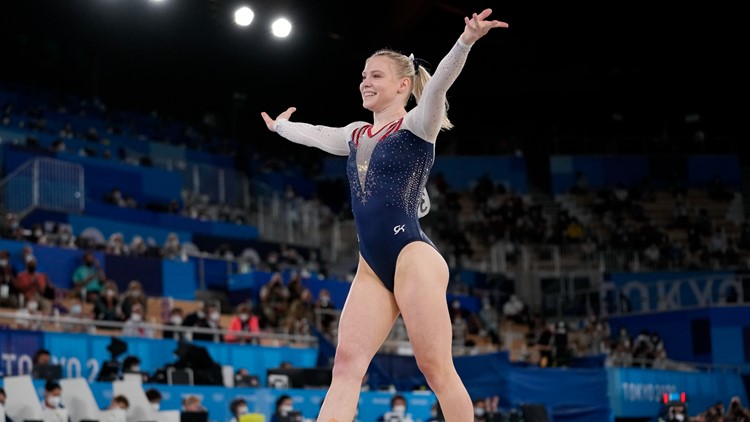 Karsten Warholm of Norway obliterated his own world record in the Olympic 400-meter hurdles.

WASHINGTON — The quest for gold medals is on track for the U.S. women’s basketball and volleyball teams after finishing at the top of their groups in pool play on Monday, but the U.S. women’s soccer team can’t say the same.

It was an eventful day of competition at the Tokyo Olympics, with the United States bringing home gold in the women’s gymnastics floor exercise, without Simone Biles.

Check out the major events of the postponed 2020 Tokyo Olympics:

Karsten Warholm of Norway obliterated his own world record in the Olympic 400-meter hurdles, finishing in 45.94 to crack the old mark by .76.

One of the most anticipated races on the program more than lived up to the hype. Second-place finisher Rai Benjamin of the United States finished in 46.17, a mark that also beat the record Warholm set last month.  This time, it was good for only second. Warholm flashed that trademark look of amazement when he crossed the line first. Alison dos Santos of Brazil finished third and six of the eight runners broke either a world, continental or national record.

The 21-year-old from Arizona bounced back from a frightening stumble during the vault final on Sunday to claim the top spot on the floor with a score of 14.366. The medal is the fifth claimed by the U.S. women’s gymnastics team in Tokyo, even with star Simone Biles sitting out four finals to focus on her mental health.

Italian Vanessa Ferrari, fourth at both the 2008 and 2016 Olympics, claimed silver. The 30-year-old’s dramatic performance drew a roar from the various federations inside the Ariake Gymnastics Centre.

Angelina Melnikova of the team representing the Russian Olympic Committee and Mai Murakami of Japan tied for bronze with a score of 14.166. The gymnasts had both the same difficulty score and execution score in their routines.

Shoutout to the coaches too! ❤️

The Americans have won 52 consecutive Olympic contests dating back to the bronze medal game of the 1992 Olympics. They went undefeated in group play — albeit not in the dominant fashion the team is used to.

On Monday the team beat France 93-82. The next challenge for the U.S. is its rival Australia in the quarterfinals of the women’s basketball tournament.

RELATED: US women lose in soccer, win in volleyball, basketball

The Opals beat the Americans in an exhibition last month in Las Vegas. And since play began at the Tokyo Games, the U.S. has continued to be tested unlike any other time during its run of six consecutive Olympic gold medals.

USWNT knocked out of medal competition

Jessie Feming scored on a penalty kick in the 74th minute and Canada knocked the United States out of gold medal contention in the Olympic women’s soccer competition with a 1-0 semifinal victory.

Canada will face the winner of the late semifinal in Yokohama between Sweden and Australia. The gold medal match is set for Friday at the Olympic Stadium in Tokyo.

It was the second time the United States has been knocked out of medal contention at the Olympics. At the 2016 Games, it was defeated by Sweden in the quarterfinals.

In a scoreless game, Canada converted a late penalty to send them to the Gold Medal match, while Team USA will look to secure the bronze against Australia.

Canada had not won against the United States since 2001.

The U.S. had an uncharacteristically uneven tournament, starting with a 3-0 loss to Sweden that snapped a 44-game unbeaten streak, and a scoreless draw with Australia in the group stage.

No one could pass Allman’s discus throw of 68.98 meters (226 feet, 3 inches). After her throw, she waited through an hour-long delay and around 50 throws by her competition.

“To be here, to be in this moment, feels so surreal,” Allman said.

Transgender weightlifter Laurel Hubbard finally got to compete at the Tokyo Olympics. It didn’t last long but it was significant.

Hubbard couldn’t complete any of her first three lifts and that ruled her out of medal contention in the women’s over-87-kilogram division.

The New Zealander made a heart gesture to the audience with her hands before leaving the competition arena. Hubbard is not the only transgender athlete competing at the Tokyo Games, but she has been the focus of attention as a medal contender in weightlifting.