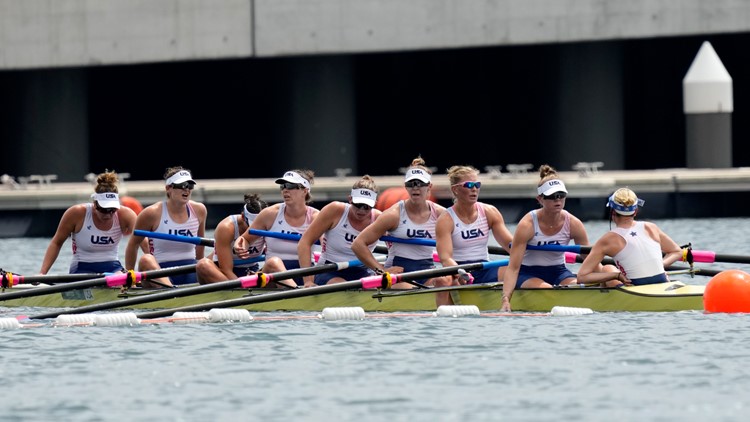 The American gold medal dynasty in the women’s eight ended when the U.S. finished fourth in the final. That defeat left the U.S. heading home without a rowing medal.

TOKYO, Japan — Rowing at the Tokyo Olympic Games may be remembered more for the British and American dynasties that sunk rather than the boats that won.

After so much success in London in 2012 and Rio de Janeiro in 2016, Britain leaves Tokyo with just two medals, and its famed men’s four nearly caused an embarrassing crash in a stunning loss.

The Americans didn’t win anything at all for the first time in since 1908, excluding the boycotted Games of 1980. The once-dominant U.S. women’s eight that had won three consecutive Olympic titles, finished fourth.

The British and U.S. programs have work to do for Paris 2024, and leaders of both programs say changes will be made.

“Change is clearly necessary,” U.S. Rowing Chief Executive Officer Amanda Kraus, who took over the program in late 2020, wrote in an open letter on the program’s website. “We cannot maintain the same systems, culture, and structure and expect better results. The athletes who dedicate their lives to achieve success in our sport deserve the very best we can possibly provide.”

U.S. Rowing went to the Games while still waiting for the results of a months-long assessment commissioned by the U.S. Olympic & Paralympic Committee of the rowing programs, including longtime men’s coach Mike Teti, who has been criticized by some rowers for what they call his intense and intimidating style. Some have accused him of making physical threats and verbal attacks.

Teti has previously said he believes he has coached “fairly, with the athletes’ well-being in mind.”

New Zealand and the Netherlands led the Tokyo medals with five each. Seventeen countries medaled overall, and China looks like a country on the rise after three, including a bronze in the women’s eight that shut out the U.S. in its best event.

Britain’s lowest moment came in the men’s four, an event it had won in every Olympic Games since 2000. With about 500 meters to go, a steering problem sent the British boat veering wildly toward the Italian one. A clipped oar likely cost the Italians a silver medal and Britain finished fourth.

“We need to ask ourselves tough questions. We had a four-medal target, we didn’t meet that target. We didn’t meet our own expectations. We can’t hide from that,” British performance director Brendan Purcell told Press Association on Friday.

Former British rowing star Sir Steven Redgrave, who is now leading China’s rowing program as that team’s high performance director, called the British results “disappointing.” He was in the British fours boat that started the country’s win streak that ended in Tokyo.

Redgrave said British “changes” in the British program delivered the poor results. He did not elaborate. British rowing head coach Jurgen Grobler stepped down in August 2020 after overseeing British crews for seven Olympics.

“I’m just stating facts,” Redgrave said. “They changed our system in the last year and suddenly from being one of the best nations, we’re down near the other end.”

When asked if he sees himself with China at the 2024 Olympics in Paris, Redgrave noted his contract runs through the end of those Games.

“I have to assess if my bosses still want me, if I’ve still got a future, and we’ll see from there,” Redgrave said. “China has the athletes, has the resources, and some of the know-how, to be the strongest rowing nation in the world. I was brought in to get them there.”

If the British medal haul was a pittance, it was Olympic riches compared to the Americans.

But the U.S. crew had lost its invincible aura when it was beaten at the world championships in 2017 and 2019. The Tokyo crew returned only two members from the 2016 gold medal boat.

An impressive opening heat shot them straight to the final, but the U.S. was quickly dropped by the leaders in the medal race and was never in contention.

The U.S. team had to overcome a COVID-19 outbreak that forced them to scatter from their home base in New Jersey in early 2020 and train alone for several months.

“To get here took an inordinate amount of effort and belief in ourselves and each other. I would do the whole five years over again, even knowing what the result would be,” said Katelin Guregian, coxswain for the U.S. women’s eight and one of the two Olympic holdovers.

Kara Kohler was the other top medal hope for the U.S. in women’s single sculls, but the bronze medalist at the 2019 world championships didn’t make the Olympic final in Tokyo.

“This is a disappointing moment indeed, first and foremost for the rowers themselves and the individuals who coached and cared for them,” Kraus wrote. “I am very proud of every rower in our boats, and I look forward to mapping out a brighter future for our sport.”