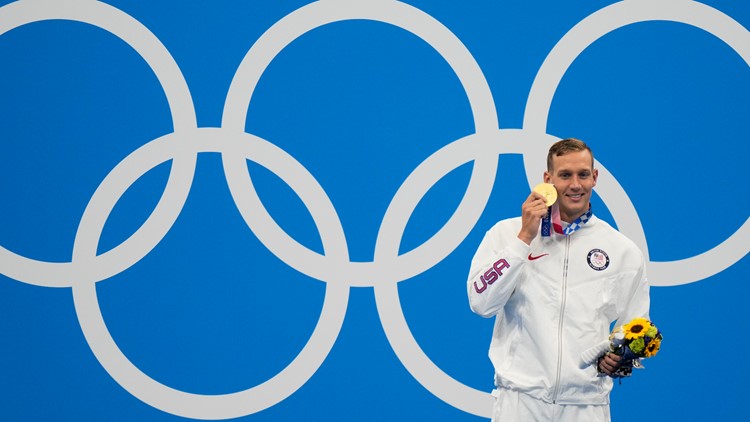 Make it five for Caeleb Dressel. The American star won his fifth gold medal of the Tokyo Olympics in the final race at the pool.

WASHINGTON — It’s time to close down the pool at the Tokyo Olympics as the final medals in swimming have been awarded. Across town, the first medals in some of the other major events were awarded, including the first for a brand new mixed team relay.

Make it five for Caeleb Dressel. The American star won his fifth gold medal of the Tokyo Olympics in the final race at the pool. He joins an elite club of just four other swimmers ever with at least five gold medals at one games.

Following up his win in the 50-meter freestyle, Dressel swam the butterfly as the United States set a world record in the 4×100 medley relay.

With another strong finishing kick, Finke became the first American man in 37 years to win the 1,500 freestyle. He added to his victory in the 800 free, a new men’s event at these games.

RELATED: Finke wins swimming gold for US in 1500m

US wins silver in debut event

Britain’s Charlotte Worthington put on a show in BMX women’s freestyle Olympic debut, landing the first 360 backflip in women’s competition to knock off American Hannah Roberts at the Tokyo Olympics.

Roberts, a three-time world champion at 19, set the bar in her opening run, landing a backflip with a tailspin for a 96.1.

Worthington crashed on her first run, but pulled out all the stops in her second. The 25-year-old added a front flip to her 360 backflip and closed with another backflip for a 97.5.

Roberts, the top seed, had a chance to top the Brit, but landed hard off an early jump and waved off the rest of her second run.

Switzerland’s Nikita Ducarroz took bronze with an 89.2 in her second run.

Fastest woman in the world

She crossed the line in 10.61 seconds to defend her title and lead a Jamaican sweep of the medals. The old record of 10.62 belonged to Florence Griffith Joyner. She set that mark at the 1988 Seoul Olympics.

Thompson-Herah beat rival Shelly-Ann Fraser-Pryce by .13 seconds. Shericka Jackson won bronze. This had been shaping up as a fast race for some time. Fraser-Pryce ran the fourth-fastest time in history at 10.63 seconds in June.

The American lineup for the 4×400 mixed relay was rather unexpected. There was no Allyson Felix on the track. Although one of the favorites, the U.S. settled for a bronze medal. Given their whirlwind of emotions following a disqualification in the opening round for an exchange, an appeal, and a late-night reinstatement into the final, any medal was cause for celebration. The United States wound up behind gold medal-winning Poland and runner-up Dominican Republic as the mixed relay made its Olympic debut at the Tokyo Games.

RELATED: Nearly out of event, US earns bronze in 4×400 mixed relay

Americans Sarah Sponcil and Kelly Claes are out of the beach volleyball tournament after a three-set loss to Canada in the knockout round opener.

Heather Bansley and Brandie Wilkerson beat the U.S. 22-24, 21-18, 15-13 at the Shiokaze Park venue. Americans Phil Dalhausser and Nick Lucena are set to meet Qatar in the afternoon session.

Claes and Sponcil entered the games as the hottest team in the world, winning the last two events of the pandemic-extended qualifying period to grab the second U.S. spot in Tokyo. In the process, they knocked out five-time Olympian Kerri Walsh Jennings.

RELATED: US pair knocked out of Olympic beach volleyball