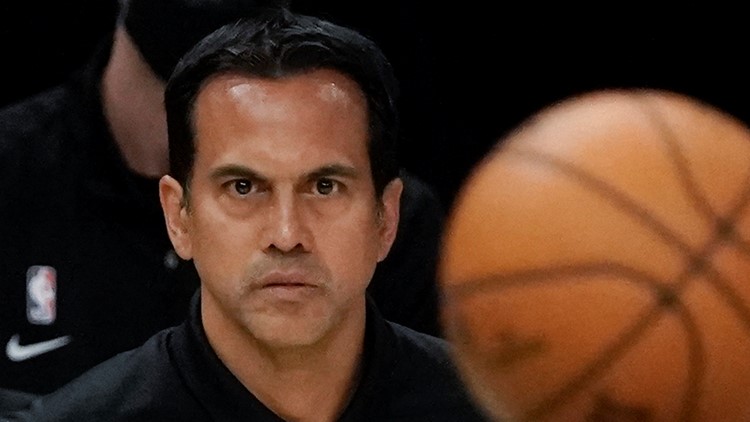 Coaches have needed to wear masks throughout games all season, and some even got calls from the NBA with a reminder to be more committed to the rules.

Just in time for the playoffs, the NBA told its head coaches Saturday they may work without masks during games if they have been fully vaccinated.

Assistant coaches and players are still required to wear masks in the bench area. Head coaches — if vaccinated — may choose to go without masks after pre-game introductions through halftime, then again after halftime until the game concludes.

The memo, sent Saturday just a few hours before the postseason opener between Miami and Milwaukee and obtained by The Associated Press, also said that head coaches will have to wear masks during halftime, during warmups and shootaround before the start of the third quarter and postgame. If opposing coaches choose to meet briefly on the court after a game, masks are encouraged.

The updated policy is consistent with the way things have been trending in the NBA during the pandemic: Those who are vaccinated simply have more freedoms than those who are not. And coaches began taking advantage immediately, with Miami’s Erik Spoelstra and Milwaukee’s Mike Budenholzer both coaching without masks in Game 1 of their series that started Saturday afternoon.

Coaches have needed to wear masks throughout games all season, and some even got calls from the NBA with a reminder to be more committed to keeping the masks over their nose and mouth. But for the playoffs, the league said it was making the mask change “to facilitate in-game coaching duties, and in light of vaccination rates among NBA head coaches” along with recent updated guidance from the Centers for Disease Control and Prevention.

Coaches will still need to participate in the NBA’s testing regimens, the league said.

Meanwhile, for the playoffs, the NBA is going to see its largest crowds of the season.

Miami announced Saturday that, starting with Game 3 of its series against Milwaukee on Thursday, it has increased capacity to 17,000 fans — basically double what it was planning to have for the start of the playoffs.

The Heat said the NBA, along with local government, approved increased seating capacity, and it would remain in place for the rest of the playoffs.

“You just start to see more and more signs that things are coming around,” Spoelstra said. “It brings you a great deal of hope, just in general.”

The 17,000 fans represent roughly 85% of the building’s capacity in Miami. The Boston Celtics said they are increasing attendance limits for Game 3 of their series against Brooklyn on Friday, and that for Game 4 on May 30 they will be at “near full capacity.” Same goes with Atlanta, which said Saturday it would have “near-full fan capacity” for its home playoff games.

New York planned on welcoming up to 15,000 fans for its playoff games at Madison Square Garden against Atlanta, with that series starting Sunday, and Utah is prepared to host 13,000 fans to start its series against Memphis, also beginning Sunday.

“You don’t realize how much you miss them. … It’s just great to see things sort of getting back to normal,” Knicks coach Tom Thibodeau said.

In Los Angeles, public health officials were offering an additional incentive for those who are considering getting vaccinated this weekend. Residents of Los Angeles County who get their first dose of the Pfizer or Moderna vaccine, or the one-dose Johnson & Johnson vaccine, on Saturday or Sunday will be eligible to enter a drawing for two season tickets for Los Angeles Lakers games next season.

More changes to NBA policy could be coming as the playoffs go along. The NBA hasn’t ruled out the possibility of arenas returning to 100% capacity for the NBA Finals in July. The league also is planning to evaluate whether teams can increase travel parties starting with the second round of the playoffs. Teams have been limited in how many staffers can travel to games throughout the season.

“We’re making progress. We’re moving in the right direction,” Budenholzer said. “Still a lot of work to be done with the virus and with COVID, but for our fans and for our players, to get to experience this competition, playoff basketball in person … it’s really exciting.”