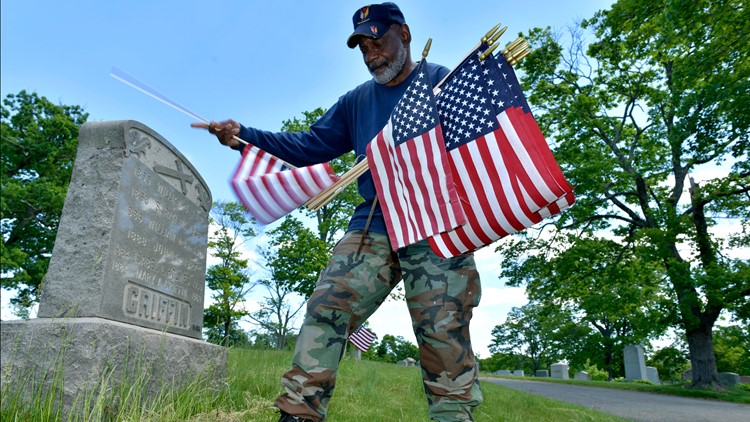 After more than a year of isolation, American veterans are embracing plans for a more traditional Memorial Day.

BOSTON — A pair of military vets navigate the hilly, meandering paths in a historic cemetery in Boston, searching out soldiers’ graves and planting American flags in front of them.

About 10 miles away, scores of other vets and volunteers do the same, placing more than 37,000 small flags on the downtown Boston Common — a sea of red, white and blue meant to symbolize all the Massachusetts soldiers killed in battle since the Revolutionary War. It’s an annual tradition that returns in full this year after being significantly scaled back in 2020 because of the pandemic.

In Boston and elsewhere, this holiday weekend will feel something closer to Memorial Days of old, as COVID-19 restrictions are fully lifted in many places.

“This Memorial Day almost has a different, better feeling to it,” said Craig DeOld, a 50-year-old retired captain in the Army Reserve, as he took a breather from his flag duties at the Fairview Cemetery earlier this week. “We’re breathing a sigh of relief that we’ve overcome another struggle, but we’re also now able to return to what this holiday is all about — remembering our fallen comrades.”

Around the nation, Americans will be able to pay tribute to fallen troops in ways that were impossible last year, when virus restrictions were in effect in many places. It will also be a time to remember the tens of thousands of veterans who died from COVID-19 and recommit to vaccinating those who remain reluctant.

Art delaCruz, a 53-year-old retired Navy commander in Los Angeles leads the Veterans Coalition for Vaccination, said his group has been encouraging inoculated veterans to volunteer at vaccine sites to dispel myths and help assuage concerns, many of which are also shared by current service members.

“We understand it’s a personal choice, so we try to meet people where they are,” said Delacruz, who is also president of Team Rubicon, a disaster-response nonprofit made up of military veterans.

There’s no definitive tally for coronavirus deaths or vaccinations among American military vets, but Department of Veterans Affairs data shows more than 12,000 have died and more than 2.5 million have been inoculated against COVID-19 out of the roughly 9 million veterans enrolled in the agency’s programs.

The isolation of the pandemic has also been particularly hard on veterans, many of whom depend on kinship with fellow service members to cope with wartime trauma, says Jeremy Butler, a 47-year-old Navy Reserve officer in New York who heads the advocacy group Iraq and Afghanistan Veterans of America.

“We’re reuniting now, but it’s been an extremely challenging year,” he said. “To have those connections cut off — the counseling sessions, the VA appointments, social events with other vets — those are so important to maintaining mental health.”

But for the families of veterans who survived the horrors of war, only to be felled by COVID-19, Memorial Day can reopen barely healed wounds.

In western Massachusetts, Susan Kenney says the death of her 78-year-old father last April from the virus still remains raw.

Charles Lowell, an Air Force veteran who served during the Vietnam War, was among 76 residents of the Holyoke Soldiers’ Home who died in one of America’s deadliest coronavirus outbreaks last year in a long-term care facility. A memorial service was held at the home earlier this week, and the names of residents who died over the past calendar year were read aloud.

Kenney, who has been a vocal advocate for reforming the troubled home, says there are still lingering questions about who else should be held accountable, even as top officials at the state-run facility face criminal negligence and abuse charges and federal and state agencies launch investigations.

“I’ve been reliving this for a whole year,” she said. “At every milestone. Veterans Day. His birthday. His death anniversary. Everything is a constant reminder of what happened. It’s so painful to think about.”

For other families, Memorial Day will be as it ever was, a day to remember loved ones killed in war.

In Virginia, Willie Ransom, a 74-year-old Vietnam War vet, said his family will hold a modest service at the grave of his youngest son.

Air Force Maj. Charles Ransom was among eight U.S. airmen killed in Afghanistan when an Afghan military pilot opened fire at the Kabul airport in 2011. The American Legion post in Midlothian, Virginia, that the elder Ransom once helped lead is now named in his honor.

The Powhatan resident says a silver lining this year is that the country is poised to end the war that claimed his 31-year-old son and the lives of more than 2,200 other American fighters. President Joe Biden has promised to end the nation’s longest conflict by Sept. 11, the anniversary of the 2001 terror attacks that launched the war.

“It’s the best decision we could make,” Ransom said. “It’s become like Vietnam. They don’t want us there. We should have been out of there years ago.”

Back in Boston, DeOld will be thinking about his father, an Army vet wounded in a grenade attack in Vietnam.

Louis DeOld returned home with a Purple Heart and went on to become a police officer in New Jersey, but the physical and mental scars of war persisted long after, his son said. He died in 2017 at the age of 70.

On Memorial Day, DeOld will gather with fellow vets at the VFW post in the city’s Dorchester neighborhood that he commands.

They will lay a wreath by the American flag out front and then grill burgers out back. It will be the first large social event hosted by the post since the pandemic virtually shuttered the hall more than a year ago.

“I hope it’s nice,” DeOld said. “I hope folks linger. Families and friends gather. Good camaraderie. The way it should be.”