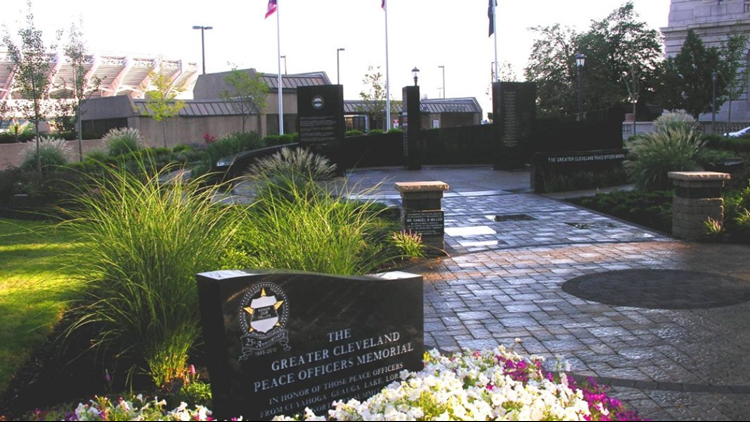 CLEVELAND — Tonight in downtown Cleveland, a candlelight vigil is being held to pay tribute to those police officers who made the ultimate sacrifice in the line of duty.

The vigil is being held at the Greater Cleveland Peace Officers Memorial.

The event is part of the Greater Cleveland Peace Officers Memorial Society’s (GCPOM®) 36th annual Police Memorial Commemoration as part of Police Week. Last Saturday, a grave marker ceremony and placement was held. Volunteers will traveled throughout the region and placed markers on the graves of the Officers commemorated on the GCPOM®.

On Friday, a parade will be held starting at 10:30 a.m. The route begins from Lakeside Avenue and East 12th Street, continuing along Lakeside Avenue to the GCPOM®. Parade participants include officers from local, county, state and federal agencies throughout the U.S. and Canada; and surviving family members of officers who made the supreme sacrifice. Parade staging starts at 9:30 a.m. at E. 12th and Lakeside.

Also on Friday, there will be a Memorial Service at Police Memorial Square (Huntington Park) immediately following the parade at 11:30 a.m. Then at 6 p.m., there will be a Police Fellowship Rib Roast at the Cleveland Police Patrolmen’s Association Hall at 1303 West 58th St. until 8:00 p.m.

Watch Monday’s entire vigil in the player below: